Pleasing The Colonel by Renee Rose 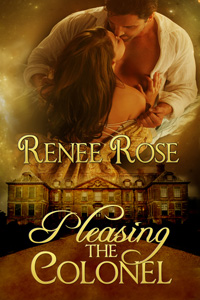 Trapped in a crevice after a carriage accident, Amanda Downy is not sure whether she’ll ever see the light of day again. With her tongue loosened by a fellow passenger’s flask of brandy, she reveals several well-guarded secrets about her life as a governess at Colonel Watson’s residence, including the fact that she falsified her references to gain her employment.

The next morning Amanda is horrified when she finds that the passenger who saved her life after the carriage crash is sitting at the breakfast table at Colonel Watson’s estate, and it appears that he is the long-absent Colonel himself! Amanda is certain that she will be immediately dismissed, but the Colonel has a different sort of discipline in mind for her.

Publisher’s Note: Pleasing the Colonel contains sexual scenes and spankings, including domestic discipline in a historical setting. If such material offends you, please do not buy this book!

Her hands turned ice cold as she realized what kind of punishment he had selected for her. She willed her body to move and stood up. Be brave, Mandy, she told herself. She clenched and released fistfuls of her skirts at her sides.

Her breathing was coming in fast, short gasps. She stepped to the edge of the desk and hesitatingly leaned over it.

“Lift your skirts,” he commanded.

Oh mercy. She had not adopted the new fashion of wearing drawers under her dresses, so lifting her skirts would mean completely baring her backside for his view and punishment. Embarrassed by the mere thought, she slowly reached back and gathered the skirts of her dress and petticoat in each hand, hiking them up to her waist to expose her bare bottom for his view. She squeezed her eyes shut and tried to block out the humiliation that was making her skin feel hot and flushed all over. The edges of the skirts still hung over her bottom, offering a bit of cover, but she felt the brush of his sleeve and the skirts were flipped up onto her back. She shivered involuntarily and for some reason remembered the feel of his hands on her bottom the night before, boosting her out of the crevice.

Her heart was hammering in her chest. She had not been whipped since she was eight years old and had smashed her sister’s china doll in a fit of jealousy. She imagined an adult whipping would be much, much worse. She hunched her shoulders and lowered her head, her eyes still squeezed shut in anticipation. She heard the whistle of leather swinging through the air the second before it struck her buttocks and she gasped at the sting. Another fell and then another and another. Tears came to her eyes and she tried hard not to cry out, embarrassed beyond belief at the humiliation of having her bare bottom chastised by her stern employer, and she was determined to take it all with a stiff upper lip. By the time he had applied the strap up and down her bottom two times, she found the pain was unbearable. She was starting to dance in place, jerking and flinching to avoid the strap, making soft little sobs. She felt a firm hand at her low back then, pressing her torso down and holding her in place. For some reason it made her feel further chastised, as if she had failed to hold still and take her punishment properly.

The strap continued singing through the air, its stinging bite now causing her to cry out each time it struck and tears to flow freely onto the desk. It struck her upper thighs and she nearly screamed. On and on, he continued to apply the strap until she was sobbing. Her backside was on fire, a burning tingle on the surface and a tender soreness down deeper. Finally, she realized the strap had stopped swinging and she started to lift her torso, but the Colonel’s hand on her back pressed her back down.