She thinks she can handle a man like me. She’s wrong. 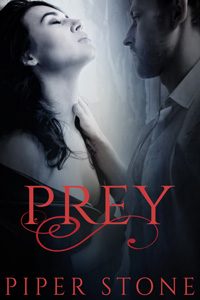 Within moments of setting eyes on Sophia Waters, I was certain of two things. She was going to learn what happens to bad girls who cheat at cards, and I was going to be the one to teach her.

But there was one thing I didn’t know as I reddened that cute little bottom and then took her long and hard and oh so shamefully: I wasn’t the only one who didn’t come here for a game of cards.

I came to kill a man. It turns out she came to protect him.

Nobody keeps me from my target, but I’m in no rush. Not when I’m enjoying this game of cat and mouse so much. I’ll even let her catch me one day, and as she screams my name with each brutal climax she’ll finally realize the truth. She was never the hunter. She was always the prey.

“Pinch your nipples for me,” he commanded then blew hot air across her stomach.

She obeyed instantly, sliding her hands to her breasts, flicking her fingers back and forth.

He smacked her inner thigh, forcing her to jump. “You truly don’t know how to obey.”

“I’m trying,” she whispered then, using her thumbs and forefingers, she pinched her nipples, her mouth opening as she whimpered.

“Harder. I want to hear you cry.” He resumed his feast, taking his time licking every inch of her pussy. He slid two fingers inside, pumping in hard and fast motions.

“Jesus. I…” She licked her lips, trying hard to obey as she twisted her hardened buds.

He adored the shimmer covering her face, the way her lower lip quivered. She was even more beautiful in the throes of passion. Adding a third then fourth finger, he flexed them open, slowing the pace as her muscles clamped around the thick invasion, trying to draw him in even deeper.

Tossing her head back and forth, she bucked her hips as he sucked on her clit, taking the tender flesh between his teeth. “God!” Her squeal floated between them. She lifted her legs until her feet rested on the counter, spreading wide open.

He rubbed the inside of her leg, caressing as he worked his mouth and tongue up and down. While he wanted to eat her for hours, making her come several times, his own needs pushed at his sinful mind. Every dark need burst through the surface, forcing him to thrust his fingers in harder and faster.

Growling, he moved both hands up to her breasts, cupping and squeezing as he buried his face, shaking his head back and forth.

She jerked up, her mouth wide open in a silent scream as her entire body began to shake. As she erupted, filling his mouth with her succulent juice, he closed his eyes, savoring the sweet moment. Sadness crept in beside his excitement, his heart racing. Letting her go was going to be the roughest decision he’d ever made.

“Fuck, I…” A smile crossed her face as another climax hit her hard, her face turning the same shade as her well spanked bottom.

Wrath finally stood, gazing down at her as he unfastened his jeans, removing them slowly. She opened her eyes, her pupils dilated yet she watched his every move, her mouth pursed.

When she finally stopped shaking, he dragged her off the island, carrying her close and yanking a chair from the kitchen table. He sat down with a hard thud and pulled her on top, impaling her pussy in one thrust. They both exclaimed, her fingers gripping his shoulders. He adored the way she clung to him, her nails scratching as she tried to hold on.

Sophia purred as she began to rock him, lifting up on her toes as she moved forward and backward. Her smile was laced with a touch of evil, as if she was the one regaining control.

He cupped her bottom, keeping a firm hold, grinning as she moaned from the friction. “You’ll always be my bad little girl.”

“Mmm… I hope so.” She bit her lip then lowered her head, nipping his earlobe.

Tingles rushed down his back, shifting to his legs and he was electrified by the combined heat, his nerve endings on fire. He ran his hand up along her spine, allowing his fingers to dance across her skin. This was the woman he could fall in love with.

“Mmm… You feel so good,” she whispered, her head lolling forward.

“We’re not finished,” he breathed and lifted her all the way off, turning her to face the other direction and holding her aloft.

“You have no idea, my sweet girl.” Chuckling darkly, he wiggled his cock between the cleft of her ass, sliding the tip just inside her dark hole. “Every hole belongs to me.” He pulled her down slowly at first, spreading her muscles as she whimpered. Then he yanked her the rest of the way, the hard thud of her bruised bottom hitting his legs like the finest music.