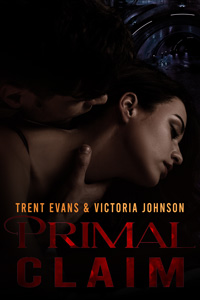 She thought belonging to an alpha would be shameful. She was right.

For a high-powered corporate manager like Chastity Sinclair, being claimed by an alpha was unthinkable. She would never allow herself to be mastered in such a humiliating fashion.

Until she went into heat and Adam Morgan caught her scent.

Then it wasn’t up to her anymore, and not just because an alpha like him had the right to strip her bare, punish her for her defiance, and use and enjoy her beautiful body in any way he pleased.

It wasn’t the law that made her beg for every climax as he ravaged her over and over again.

It was nature itself.

Fingertips tapped against her clenching asshole, and Adam hummed above her. “Soon enough, little Omega. You’ll be taking my cock in every hole, including this one right here.” He tapped her asshole again, harder this time, and Chastity couldn’t help the whine of anxiety she let out. She squeezed her legs tighter together, as if that would stop Adam from looking directly at her center.

He chuckled, fingers dipping lower and spreading her wet pussy lips. “So needy. Your cunt is positively gushing, girl.”

Chastity gasped at the stretch as his fingers pressed deep without ceremony, and turned her face further into her couch. The voice of reason in the back of her head screamed at her to protest, fight him off, do something…

Her body knew what it wanted, though, and she moaned as his fingers fucked in and out of her pussy. The stretch was just shy of uncomfortable, and his cock throbbed against her hip again. Even encased in his jeans as it was, it was enormous, and Chastity felt her face flare at the thought of that monstrosity inside her. He had fucked her during her heat, yes, but surely there was no way that it was going to fit inside her now that she wasn’t in heat… was there?

“Stand up, girl.” His touch disappeared from between her legs and she couldn’t stop the needy moan she let out as he helped her up. She ducked her head, refusing to look the man in the eye as he stood up. Her face burned with humiliation; she barely knew this man, why was she letting him order her around her own home and treat her like a whore? He had just spanked her like a fucking child, for God’s sake!

He nudged her into the middle of the room and slowly circled her as he stripped down, dropping his t-shirt and pants carelessly on the floor. Chastity followed him with her eyes, and couldn’t stop her mouth from watering when his cock sprang free of his jeans. It stood out, proud and red as he walked around her. Chastity whimpered softly as he slowly closed in on her, and the glint in his eye told her that he’d heard.

“Needy Omega slut. I’ll give you what you need.” He stopped behind her and tapped her hands. “Hands behind your head. Straighten this back. Your posture is atrocious.”

She blushed fiercely as she obeyed after a brief hesitation, her tits thrust out proudly as she forced her shoulders back. He hummed approvingly.

“Now bend at the hips. Keep your back straight.”

She glanced at him, a protest on her lips. The hard expression on his face stopped the words in their tracks, though, and she swallowed hard. This was part of the lesson too, she realized. Her burning ass cheeks were a testament to what happened when she didn’t learn the lesson, and she didn’t think that she could take much more pain.

Her back muscles protested as she lowered herself to the instructed position, and her thighs trembled. The position was stressful and embarrassing, her tits swinging underneath her as she breathed slowly, trying not to collapse to the floor. Surely he wouldn’t expect her to hold his position for too long…

His cock pressed up against her ass, and he reached underneath her to tweak one of her hard nipples harshly. She whimpered, the pain melding with her need to create an unbearable miasma. She could practically taste her desperation, and despite her resolve, she knew that she was close to breaking down and begging for his cock.

“Every time you’re punished, you’ll finish it out with my cock deep inside your cunt. Or mouth. Or ass. You don’t get a reprieve from serving me just because you have a sore ass. You need the reminder of your place, Omega.” He grasped her hips and sheathed his cock inside her in one thrust, groaning loudly as Chastity clenched down on him. She whimpered as he settled just a little deeper inside her, the painful stretch exquisite to her desperate body.