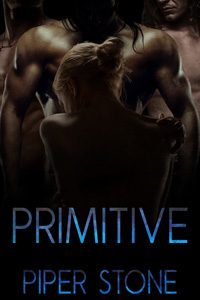 I came to this planet to study men. I found only beasts.

I was sent to this world to help build a new Earth, but I was shocked by what I found here. The men of this planet are not just primitive savages. They are predators, and I am now their prey…

The government lied to all of us. Not all of the creatures who hunted and captured me are aliens. Some of them were human once, specimens transformed in labs into little more than feral beasts.

I fought, but I was thrown over a shoulder and carried off. I ran, but I was caught and punished. Now they are going to claim me, share me, and use me so roughly that when the last screaming climax has been wrung from my naked, helpless body, I wonder if I’ll still know my own name.

I whimpered as the Viking lifted me off my feet, cradling me in his arms. He hesitated only seconds before walking me toward the bed, dropping to one knee. He tossed me onto all fours, wrapping his hand around my hair and yanking. I eased my legs apart, taking several deep breaths as the anticipation gave me a rush of adrenaline.

They were all going to fuck me. Fill me.

I felt the head of his cock press against my pussy lips, spreading me ever so slowly. He gripped my hip, pushing in an inch at a time. He was so thick, so wide that I whimpered as my muscles ached, trying to accept. When he thrust the rest inside, I cried out, my own voice echoing. As he pumped in rapid motions, the force pushed air from my lungs. I could barely breathe, a jolt of current jetting through every muscle.

He growled over and over again as he fucked me, skin slapping against skin. I’d closed my eyes, enjoying the ravaging moment until I heard a rustle and felt heat beneath me.

One of the gorgeous aliens had positioned himself underneath my shaking body, waiting his turn to take me like a savage beast. His eyes were so beautiful, varied colors swirling even in the dim lighting. I was lost in them as the Viking plunged brutally. A single growl seemed to give the alien permission, my Viking pulling free.

I almost cried out, begging him to stay inside, to continue his wondrous actions, but within seconds, I was yanked on top of the alien. He held me aloft, lifting a single eyebrow. I didn’t hesitate, positioning his cock just inside my pussy. He pulled me down ever so slowly, his hands on my hips and he forced me to rock.

I did so with utter joy, rocking my body forward and backward. Three more cocks appeared in front of my face, the beasts eager and hungry for their turn. I let myself go, refusing any and all inhibition and simply opened my mouth.

Fingers found my asshole, slipping inside. The Viking. He would take me first, fucking my dark hole before any of the others. I tensed, unable to react as one cock filled my mouth, hands gripping my head. Other hands found my breasts, caressing and pinching my nipples.

Then the Viking slid his cock into my asshole.

The pain was shocking, forcing my body to lurch and he refused to stop even as my muscles struggled to accept. I moaned around the alien’s cock, my senses on overload. I knew the Viking had pushed past the tight ring of muscle and as soon as he did, he refused any concept of being gentle.

Every stroke was forceful, shoving me forward and as his skin slapped against mine, I could feel the stinging from the round of discipline. I clenched my muscles, knowing that the alien fucking my pussy wasn’t going to last long. He struggled, holding me, gritting his teeth, but when he roared as if to the heavens, I felt the warm gush as he erupted, filling me with his seed.

The alien brushed his fingers across my face, murmuring something I couldn’t understand then shifted until another could take his place.

2019-07-07
Chris
Previous: Her Strict Daddy by Morganna Williams
Next: The Duke’s Pet by Lily Harlem