Properly Theirs: A Punishment Reverse Harem Romance by Emily Tilton 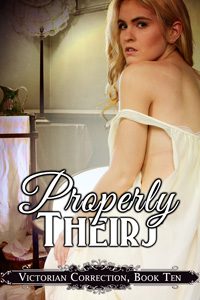 After she is terribly rude to a gentleman with powerful connections, eighteen-year-old debutante Caroline Montgomery’s prospects for a suitable marriage are placed in great jeopardy. If she is to have any chance for a decent match, her prideful impertinence must be punished so severely and shamefully that she is left completely humbled and properly trained to please her future husband.

To accomplish this task, Caroline’s guardian calls upon the aid of the famous Dr. Brown, and soon enough the beautiful, headstrong young lady has been stripped bare, intimately examined, and firmly chastised. But it will take much more than a sore, thoroughly caned bottom to ensure that such a wayward girl is appropriately penitent, and Caroline’s correction has only just begun.

Over the coming days, her beautiful, virgin body will be claimed, used, and shared by four stern, handsome gentleman and one strict, beautiful lady, and by the time they are finished she will truly understand how it feels to quiver with need and burn with humiliation at the same time.

The doctor looked about—first to Mr. Rackley, and then to the earl, finally taking in the captain and Robert with his canvass. Caroline felt faint, and her cheeks blazed as she saw with what approval each man greeted the physician’s recommendation.

Mr. Rackley answered for all of them. “Certainly, Doctor. Your Lordship, would you care to go first?”

Then they all touched her that way, one after the other, and Caroline cried out under each different caress. The earl rubbed firmly, looking from her eyes to her wet cunny all the while, as she whimpered under his fingers. Then, with a wink, his lordship let her guardian have a turn. Mr. Rackley looked only into Caroline’s face, very gravely, as he moved his fingers slowly in and out of her maiden furrow, pushing so far in that she grew alarmed. When she cried out at the strange feeling of pressure, somehow despite the shame unable to remove her eyes from his, he said, “Good girl,” and let the naval officer have his turn.

Captain Rather gazed down at the two fingertips he moved in a gentle circle on Caroline’s little bud, but only for a moment, as if to make sure he had found the correct spot. Then he turned his eyes up to hers, and she blushed for a new reason, because she remembered how gallant he had been at the ball. To have him here, when she had no clothes to cover her nakedness, as one of the men who would train her in this lewd way, made her feel she might swoon away with the mingled pleasure and shame of his caress.

“There, Miss Montgomery,” said the captain softly. “There we are. Shall I give you to Robert, now?”

“Oh, please…” Caroline began, but Captain Rather had already stepped back, and the coachman loomed over her with that awful air of superiority. He put his big hand on her cunny and gave it a hard squeeze, so that Caroline yelped and tried to get away, even as the roughness seemed also to make her melt down there, and embarrass herself with another helpless flow of arousal into his hand.

“What a little whore,” Robert said. “This cunt is like a spigot.” The earl laughed, and so did Miss Erskine, as the coachman stepped back.

The doctor moved forward again, and spoke to Miss Erskine. “Have you begun the girl’s training in any other respect, besides the caning and the urinary discipline?”

Miss Erskine nodded, and Caroline as she swiveled her eyes wildly, trying to see the older woman’s face, thought she could see pride on the dark brow.

Caroline turned to look at Captain Rather, now standing behind Mr. Rackley and next to Robert. She could not have said why, but she felt desperate to know what the captain might think of the shameful thing Miss Erskine had done in Caroline’s bottom. The officer’s eyes seemed to shine at the humiliating news, and that made Caroline’s heart race. The sensation of having that fullness in such a tiny place seemed to linger in the rosy dimple between her whipped hind-cheeks.

She couldn’t at the same time, however, help noticing the bold look upon the coachman’s face: Robert too seemed gratified to learn Miss Caroline Montgomery’s young bottom had received such firm disciplinary treatment, but his blue eyes spoke of wishing to see her brought down several pegs, rather than a desire to care for her.

“Did you accompany the plug with any other stimulation?” the doctor asked.

“I did, Doctor,” replied Miss Erskine. “We usually do that when we plug our girls, as Sarah here can attest, so that when the time comes for them to take the prick there they are eager for bottom-fucking.”

On the captain’s face, Caroline saw, with a hot flush, that, whatever the word might mean, he would enjoy fucking her young bottom.