Protected and Punished by Shelly Douglas 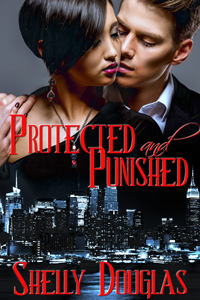 When Mika Settler learns that there is a serial killer targeting mature women in Manhattan and starts to worry that she could be a target, she decides it might be wise to seek out Jackson McKenna, a Navy SEAL turned police detective with whom she recently became acquainted. The two hit it off, and before she knows it Mika is falling head over heels in love with the handsome cop.

Mika has always longed for a no-nonsense man who will not hesitate to take her in hand, and it quickly becomes clear that Jackson fits the bill perfectly. He is fully prepared to give her exactly what she needs, even when that means baring her bottom for a good, hard spanking as often as he feels it necessary.

Jackson’s firm-handed discipline only increases Mika’s desire for him, and he soon proves more than capable of leaving her completely satisfied and utterly spent yet somehow still longing for more. But the murderer is still on the loose, taunting Jackson personally from time to time, and Mika’s fiery, obstinate attitude isn’t going to make solving the case any easier for him. Can Jackson hunt down the killer before Mika becomes the next victim?

“I want you bare-assed and bent over right now.”

Mika responded to his command with an innocent look that clearly asked, did I say something wrong?

The next sound heard was his hand cracking down the center of both cheeks. Instead of uttering a noise in protest, she immediately bent over and grabbed the sheet with white-knuckled fingers as he raised the nightshirt up to her waist. Jackson’s smile was wide at the delicious display in front of him and placed one hand on the small of her back to make sure she stayed in position while he disciplined her. He spanked her over and over again with an open palm and grinned as her bottom wobbled from the blows. While his blue eyes focused on her wiggling hips trying to get rid of the sting, Jackson’s cock remained thick and hard, knowing it wouldn’t be long before he was inside her tight, throbbing pussy. When a bright red glow began to radiate from her ass and she finally yelped, he stopped.

“Apologize for your rudeness.”

“You’re going to choose this moment to lie to me?”

“Say it.” He smacked her ass again.

“I know it gets under your skin.”

Mika’s head turned and she rolled her eyes.

“What happens when you do that?”

She lifted her shoulders.

“You’ll spank me,” she murmured with tears in her eyes.

“What else does my girl need?”

Jackson smacked the tender crease of her bottom. “Are you going to answer, or should I ask you to bring me your hairbrush?”

“I need to be fucked.” Mika’s face rubbed against the mattress as her tears started to flow. Jackson separated her legs, lifted her hips, and positioned his cock at her hot, wet entrance.

“Say it again and be polite this time.”

2015-09-20
+admin
Previous: An Indecent Voyage by Emily Tilton
Next: The Doctor’s Pet by Loki Renard