Protected by the Scotsman by Katie Douglas 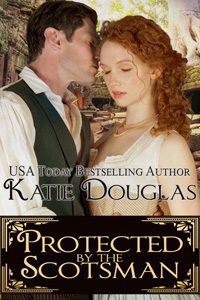 The last thing twenty-four-year-old Bobbie Huntingon-Smythe wants is to get married and settle down, so she is none too pleased when her wealthy parents send soldier-turned-bodyguard Sean McClintock to bring her home from her latest archeological expedition. To make matters worse, when Bobbie refuses to come with him willingly Sean merely takes her over his knee for a painful, embarrassing spanking and then puts her in the corner like a naughty little girl.

Despite her fury at being chastised in such a shameful manner, Bobbie cannot help being intensely aroused by the rugged, handsome Scotsman’s stern dominance. Even Sean’s belt applied to the beautiful, headstrong girl’s bare bottom proves insufficient to deter her for long, however, and soon she has snuck off on yet another risky adventure with him in hot pursuit. But when he catches her, will he end up returning her to her family or claiming her for himself?

Publisher’s Note: Protected by the Scotsman is a stand-alone novel which is the second in the Stern Scotsmen series. It includes spankings and sexual scenes. If such material offends you, please don’t buy this book.

“Little madam, you have a serious bottom-blistering due. D’you really want to make it worse by acting like none of this was your fault?”

“Right, we’ll have less of that, Roberta.” She bristled as he used her full name. He quickly had her pinned face down on the jungle’s soft ground, and he flipped her skirt back. The next sound she heard was his belt being unbuckled.

“You can’t be serious. You’re a complete and utter oaf.” She tried to kick free but he paid her no mind.

“Aye, I’m dead serious. The last one didnae seem tae do the trick so I’m taking my belt to ye harder, this time.” His brogue had become less refined, and Bobbie guessed it was because he was too annoyed to speak correctly.

The belt landed over her thin underwear and she gasped. This was much worse than before, and it had taken her by surprise. He must have put a lot more force into it, and perhaps the fact she was lying flat rather than bent over something also made a difference, because it burned furiously in a wide line. His belt was made of a heavy leather, which didn’t help.

When it landed again, she stopped being so patient with him, and began struggling to get free. She wriggled her hips and kicked her legs backwards in the hope of catching him unawares and getting him off her. The third lick was harder, and she growled as she flailed her arms, still fighting him like an angry lioness. Unmoved by her struggles, he merely pinned her wrists to the small of her back and continued punishing her.

Her bottom was seared with angry welts, and a furious burn underscored it, with the separate welts aching on top of the overall heat that emanated from her cheeks.

“You’re deplorable!” she shot at him.

“I’ll have less of the insults, lassie. I can keep belting you for as long as it takes.”

“This isn’t fair,” she retorted, her face growing hot. How did he have this effect on her, when she usually managed to face down all sorts of sticky situations with dignity and tact? Breathing carefully, she tried to temper herself, but inside she was in turmoil. There was no way out of this, and she had never been forced to submit to someone before the Scotsman had appeared in her life. It was almost too humiliating for words. The stinging swats of the belt kept coming, but the pain seemed to die down a little as she accepted that this was inescapable. He stopped, and she remained where she was, gasping for air and trying her damnedest not to cry.

“Are you going to be more amenable, now?” he prompted.

“All things considered, I feel that I have been a veritable paragon of good behaviour.” She spoke into the leaves, too exhausted to raise her head. He had thoroughly taken her in hand.

Another sensation broiled beneath the lingering burn: she hardly dared put a name to it. Normally, when it came to men, she was very forthright about what she did or didn’t want, but how could she possibly admit that she was aroused by the severe rump-roasting he’d just delivered? It hardly bore thinking about, even as her sex throbbed and ached for some relief. With a start, she remembered that the same thing had happened on the train, too. What was wrong with her? Ashamed, she sheepishly looked up at Sean and for some reason her gaze lingered on a bulge in his trousers. She gasped, then caught his gaze.

2018-03-30
Chris
Previous: Claimed for Their Use by Ivy Barrett
Next: Tamed by the Wolf by Jinx Neale