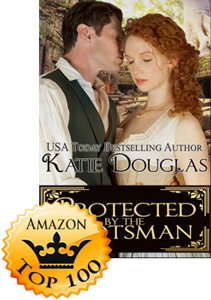 ★★★★★ Clara @ Amazon.com “Fun love story” on March 31, 2018
Katie Douglas writes a lot of interesting stuff. This book is an historical romance, but instead of going back to the Victorian period or even earlier, she chose the mid-1920s. The 20s were a huge time of change. Women had gotten a taste of independence and running things during WWI, had gotten or were fighting for the vote, and had more opportunities open to them than ever before. Meanwhile, their parents were generally much more conservative, especially at the higher levels of society, and they wanted their daughters to stay home and make a good marriage. Well, that’s not in Bobbie’s plan.

Bobbie is a strong-willed, independent young woman who is a scholar of antiquities. She goes out and searches for the next great discovery, and tries to do it before William Petrie can steal it from her. She’s still dealing with the old boys’ club and the men who just want to pat her on the head and tell her not to worry about anything. But, she’s not planning on listening to them, and she’s not going to settle down into a good marriage, even if there were any men out there to marry.

Sean has been asked by her parents to go to Egypt and fetch Bobbie back. When he catches up to her, he ends up having to spank her. That doesn’t deter her from getting away from him the very first chance she gets. Too bad he caught up to her, and spanked her again, then dragged her back to England. This starts a pattern that they are going to follow for a while.

This is a lovely, sweet story filled with Easter eggs and a lot of laughs. While there is some domestic discipline going on, primarily this is a light romance with a lot of adventure and a tiny bit of mysticism tossed in. It’s an easy read, and one that I plan on keeping in my collection for when I need something light, funny, and easy.

★★★★★ Stats23 @ Amazon.com “Indiana’s Female Counterpart” on March 30, 2018
This book can best be described as a lighthearted spanking/romance adventure, and a very good one at that. Bobbie Huntingdon-Smythe is a female version of Indiana Jones, doing her antiquarian adventures in the early 1920’s. The difference, other than her gender, is that she has a rather large Scotsman by her side (much to her chagrin) acting as her self-appointed protector/disciplinarian. Sean McClintock was initially dispatched by Bobbie’s parents to bring her safely home to England, and he fulfilled their request. From then on the action, humour, romance and adventures begin. The various scenarios Bobbie gets herself involved in are both dangerous and humorous. Sean’s involvement in the scenarios most often result in his saving her then spanking her. Each episode further enhances their budding involvement/romance. If you enjoyed the adventures of Indiana Jones (and his dislike of snakes) and enjoy a good spanking romance, you will certainly enjoy this book. I know I did, and I give it my full 5 Star rating.
I received this book as an advance review copy from the publisher.

★★★★★ Anna Kay @ Amazon.com “Uniquely interesting romance” on March 30, 2018
Wowza! What a uniquely interesting book. Bobbie doesn’t want the typical life afforded to a woman of the early 1900s. She wants adventure. She wants to explore far lands. She wants to make great discoveries. Unfortunately, her adventures are spoiled by Scotsman Sean McClintock, the man her family sent to retrieve her. Bobbie is no milksop miss and when she fights Sean, he fights right back, with a firm hand on her derrière. This story went in ways I did not expect. This time period is not always my favorite, but Ms. Douglas brought it to life and made it interesting with a storyline that was never boring. Five stars!