Protecting His Runaway by Measha Stone 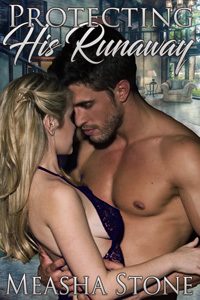 After she uncovers her wealthy father’s ties to a prominent Chicago crime family, twenty-four-year-old Addison St. Claire flees to a small town in Michigan where she hopes to start a new life. Things are not that simple, though, and she is quickly tracked down by a stern, handsome police detective who makes it clear that Addison will be coming with him whether she likes it or not.

Detective Trevor Stringer is none too pleased at being assigned to babysit a spoiled rich girl, but he is determined to keep Addison safe, even if that means taking her over his knee for a painful, humiliating bare-bottom spanking when her defiance puts her life at risk. Despite her protests, her body’s response to his bold dominance makes it obvious that Addison is in need of a firm-handed man to keep her in line, and before long she is begging Trevor to claim her properly.

Over the coming days, Addison learns what it means to belong to a man who will not hesitate to strip her bare and punish her thoroughly whenever he feels it necessary. Whether she is pleading desperately for the release she has been denied after a hard spanking or writhing with pleasure more intense than she can handle as she is brought to one shattering climax after another, Addison is left with no doubt that she has been mastered completely.  But when she discovers that Trevor has kept an important secret from her, will she ever be able to trust him again?

Publisher’s Note: Protecting His Runaway is a stand-alone book which is the second entry in the Owned and Protected series. It includes spankings and sexual scenes. If such material offends you, please don’t buy this book.

His hands had looked harmless enough, but now that they were being applied to her ass, she was sure they were made of steel and not mere mortal bone. After a few dozen swats she clenched his leg, gulping in deep breaths. The burn was becoming unbearable, and staying still wasn’t as easy as in the beginning.

His attention moved, focusing the swats to the back of her thighs.

She howled with the fresh burn and bucked up, but he’d been ready for her. Shifting his arm around her waist, he managed to keep her torso in place while continuing to lay into her ass unencumbered.

“Disobedience isn’t tolerated, Addison,” he said just after delivering a heated blow to her thigh.

“I know!” She squeezed his jeans into her fist and tried to find some corner in her mind to hide from the ferocious sting he continued to apply to her backside.

“There,” he said after another swat, and she rested her head against the bed. That wasn’t too bad, all things considered. Her ass was hot and a bit sore, but she’d live.

She should have known he wasn’t done.

The first strike of the belt against her ass had her screaming out from the line of fire. The second and third blow landed one right on top of the other, both over her sit spots. She cried out again, but he had turned deaf to her pleas.

She scrambled on his lap, trying to move away from the punishing leather. He held very little back, leaving no doubt to the seriousness of the discipline.

“Do you see what happens when you disobey?” The belt flicked across the up-curve of her ass. Even with the less intense swat, the sting turned up the heat of her ass. The man obviously knew how to deliver a blistering without giving too much.

“Yes! Yes!” she cried, feeling the tears running in hot streaks down her face. “Please.”

“If you think I’ll say no, do you think you should just go do it anyway?”

“No! No!” She shook her head to emphasize her answer, but another hot blow took her breath away. She’d never sit again, she was sure of it.

“Who owns this ass?” He patted her cheeks with his bare hand. “Who, Addison?” He slapped harder when she didn’t answer.

She was gulping in air, sobbing from the burn in her ass, and he wanted to have a conversation.

“You do,” she finally managed to croak out.

“That’s right.” The belt came down again and again. She kicked her feet and wiggled but it got her nothing. She made no strides in getting free or avoiding his punishment.

“I’m sorry! I’m sorry!” she cried out when he paused for a moment. “I’ll listen. I’ll be good. I swear!” she begged as the tears dripped down her face.

“Shhh… it’s okay. It’s okay.” One hand rubbed her back, while the other rested on the burning embers of her ass. Her body slacked over his lap. Her breath caught up to the rest of her, and her heart calmed to a steady beat. But the pulsing in her ass hadn’t subsided, and she doubted it would for some time to come.

2017-06-17
Chris
Previous: His Little Earthling by Katie Douglas
Next: His Old-Fashioned World by Emily Tilton