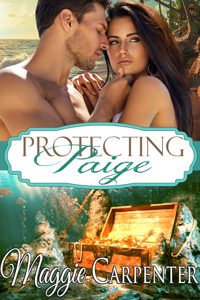 Many women would jump at the chance to spend a few days at a tropical resort with handsome movie producer Cole Barrington, but public relations specialist Paige Brooks has already been burned by him once, and she has no intention of falling for his charms a second time.

Unfortunately, Paige unexpectedly ends up tasked with ensuring that Cole’s trip to an annual celebrity charity event goes smoothly, and though she’s determined to put the past behind her, she finds herself just as captivated by the sexy, dominant man as she was the first time she shared his bed. When he promises to take her over his knee to deal with her attitude, the warning leaves her heart racing, her cheeks blushing, and her panties soaked.

Sitting next to Cole aboard a small seaplane on the way to their destination in the Caribbean, Paige cannot help clinging nervously to his arm as a gigantic cloud looms ahead. Her worst fears are realized when they are forced into an emergency landing offshore from a tiny, uninhabited island.

Stranded without a working radio, Cole and Paige must stick together, and the intense passion they once shared quickly resurfaces. Soon enough, Paige is promising to be a good girl as Cole spanks her bare bottom soundly, then writhing in ecstasy as he masters her more thoroughly than he ever did before.

She is thrilled to be back in his arms, but when they learn that the island may be the location of a long-buried treasure, they are forced to contend with both the dangers of a tropical forest and a group of criminals set on claiming the loot for themselves. Does Cole have what it takes to protect Paige not only from hired thugs, but from her own impetuous behavior as well?

If you enjoy a suspenseful romance filled with panty-melting sex, look no further than this passion-filled page-turner from Maggie Carpenter.

As he began spanking her, moving his flattened palm with a fast-paced rhythm from cheek to cheek, Paige bit her lip and squeezed her eyes shut. She’d purposefully pushed the envelope to see what he would do, and now she had his answer. Even though she’d only read the blog for a couple of days a year before, she’d devoured the posts and they’d stuck with her. Seeing if Cole was the man she believed him to be had seemed like something she simply had to do. It had almost felt like a rite of passage, but he was spanking her much harder than she thought he would, and unable to stop herself, she began to wriggle and yelp out her protests.

“You will learn two things about me, Paige,” he declared, his hand continuing to rain down its hot sting. “First, if I tell you I’m going to do something, I will absolutely do it. Take my threats as promises. Second, test me and you will not be disappointed.”

“I’m punishing you. Don’t worry, I’ll spank you for pleasure as well, but that’s not what this is about. Now,” he said sternly, pausing his hand after delivering several hard smacks, “repeat after me, I will think before I act, Sir.”

“And what will happen if you don’t?”

As he delivered the half-dozen with significant force, Paige couldn’t stop herself from yelling out loud, but she didn’t throw her hands back, nor did she kick.

“Sir, please, my bottom is so hot now, and it’s stinging like mad.”

“That’s not what I said. Are you going to make me ask again?”

“Six more to underscore the point, then we’re done.”

Cole chose to land the six slowly, wanting to make sure Paige felt the impact of each slap. This was her first full spanking and he needed her to understand he wasn’t queasy about making her bottom sting smartly if necessary, especially given the fact he was about to lead her into an area of tropical forest that was heavy going and probably offered even more hidden dangers than their first foray through the thick vegetation.

“There. We’re done. Now you’ll thank me, but before you do, I want you to tell me why.”

“Why I’m thanking you?” she bleated.

“Because you love me enough to punish me.”

2017-02-12
Chris
Previous: Taken by the Alphas by Loki Renard
Next: The Commander’s Pet by Samantha Madisen