The Queen and the Archer by Jane Fairweather 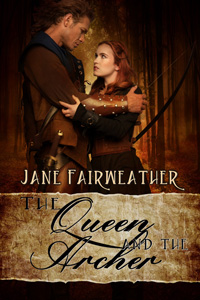 Troubles abound for King Uther of Lyonesse, but one dilemma vexes the aging monarch more than the rest, more even than the threat posed by the barbarian armies who threaten his kingdom. Uther’s daughter and heir, the Princess Rosamund, remains without a husband to guide her hand and lead her armies when she is queen, a situation due in no small part to Rosamund’s haughty attitude and penchant for tantrums.

But when Rosamund spurns the advances of the most powerful of her father’s nobles, she soon finds her world turned upside down. The rejected duke turns to treachery to gain the crown, and it is only through the courage and wit of a humble archer by the name of Will Scott that Rosamund escapes the trap which claims her father’s life. Almost before the naïve young princess knows what is happening, she finds herself in a desperate struggle to save both her kingdom and her life from the duke and his barbarian allies.

Rosamund soon discovers that Will is more than ready to protect his queen—including from her own foolishness—even if that means baring her bottom and spanking her soundly. Despite her fury at such treatment, the princess is drawn to the firm-handed archer as she has never been drawn to any other man. But if the duke is defeated and Rosamund takes her rightful place on the throne, will there be a place for an archer at the side of a queen?

Rosamund meanwhile was still kicking ferociously, but beginning to come out of her fury and suddenly wondering how she was going to get out of this alive. If only she could break her arms free from the archer’s iron grip, then she could make a run for it, but she would be hampered by her skirts. She began to panic; she could end up being strangled here in the forest, or did he have some other dreadful form of death in mind? She felt herself being rolled over onto her face and her arms pulled behind her.

“Please don’t kill me!” she cried out.

“You don’t really think I would kill my future queen, do you?” came the very haughty voice of the archer. “No, your highness, I am just going to give you the spanking of your life and hope it teaches you a few manners and a little common sense.”

“Please don’t spank me!” the princess cried out.

This was ignored. She felt herself being pulled very roughly to her feet and marched in the direction of a fallen tree. Then without another word she was pushed over it; her feet were off the ground and she had to put her hands down on the mud on the other side to steady herself.

Could she scramble over the trunk and run? The tree would at least be between her and the archer. However she did not think she could get over the tree quickly enough; there was nothing to do except to accept this horribly undignified punishment and hope that would be the end of it. She gritted her teeth; she was not going to give this common archer the pleasure of seeing the future queen of Lyonesse crying and pleading for mercy. Moreover she swore to herself if she got out of this alive she would see this traitor hang at this very spot; there was a very suitable oak straight in front of her.

He hesitated just a second before pulling her dress up; it seemed almost wrong to bare a royal bottom, furious though he was and possessed by this irrational compulsion to master this particular young woman in a way that had little to do with her present offence. He pulled the velvet of her red gown and the rich satin of her underskirts right up above her waist. Then he very deliberately raised the soft wool of her shift. Having surprised himself by doing it, he briefly contemplated her soft white buttocks and in spite of himself thought how attractive she was. He paused and for a second listened to the sound of her awkward breathing, which he noticed again was oddly in time with his own.

He slapped the right buttock of his future sovereign very hard indeed and was quite disappointed not to get a loud yelp out of her, but she did not even say ‘ouch.’ He thought how cold her flesh was; well, it was going to be a great deal warmer. He began a hard deliberate spanking, five slaps on the right buttock, then five on the left and then back to the right. She bit her lip, determined to take it in silence. This only made him even more determined to get some reaction from her. He found himself getting into a rhythm that seemed to have a will of its own. He found himself spanking her harder and harder and consciously spreading the heat and the pain over every inch of her bottom and thighs. “One two three four five,” “One two three four five.” He realized her womanhood was exposed between her legs, and if his eyes did not deceive him, it was soaking wet, but so intent was he on making this the most efficient spanking he could manage that he barely thought about it.

She by contrast realized first that the spanking would continue till there were real signs of contrition; and second that she was very painfully and inexorably moving towards an extremely embarrassing climax. And she was not going to let this peasant see her like that. She would have to give in, but she would have to make it appear that she was breaking slowly. With luck he would let her go after that. Or would he? Was there a chance he was going to rape her? Lady Philippa had frequently warned her that the lower classes were inclined to rape.

Will was getting very angry at her silence, and he was vaguely aware of her arousal, but it would have shocked him deeply if he had known that she was frightened of being raped. His sole object, he told himself, was to break through her wall of silence and drag a real sense of her own foolishness out of her. And yet his inner self kept noticing an odd union between the two bodies, which he could not quite put into words.

“No more, please! Please no more!” she said, sounding very genuine, though in truth she was faking it.

He ignored her. Oh, God, in not that many more spanks she was going to climax and she was not going to let this horrible man see that. She would have to apologise to this dreadful peasant for doing what she had every right to do and pray it ended there.

“Please stop! I should not have attacked you. I was wrong! Please let me go. I apologise. I apologise!”

Will was relieved to at long last have received an apology. Moreover now that he had come out of his own anger, he suddenly thought he should not be lingering. There were bound to be search parties.

He observed, “It took your highness long enough to get her manners back!”

Then he administered one more stinging slap and slipped off into the woods.

2014-11-26
+admin
Previous: Lacey and the Sheriff by Chula Stone
Next: The Outlaw’s Daughter by Emily Tilton