The Rancher of Gemini Canyon by Chula Stone 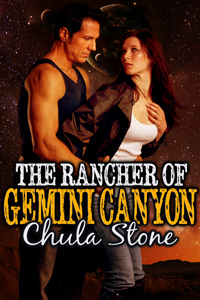 When Reece Braith returns to his ranch after two years of military service, he is shocked to discover that his brother has set up an illegal mining operation on his property. Worse still, Reece’s wife Briar was forced to work in the mines in his absence, and she holds him personally responsible for the entire situation.

Instead of greeting Reece with a loving kiss upon his return home, Briar avoids him and stows away on a ship headed off-world. Desperate to make things right between them, Reece catches her before the ship departs, throws her over his shoulder, and takes her back to the ranch, where they have a long discussion—one that involves him baring her bottom and spanking her soundly.

Even as their relationship heals and romance is kindled again between them, Reece and Briar must work hard to rebuild the ranch. But when Reece’s brother puts their lives in danger with his lawless schemes, they will be forced to fight to protect what is theirs.

Publisher’s Note: The Rancher of Gemini Canyon contains spankings of an adult woman, including domestic discipline in a futuristic setting. If such material offends you, please don’t buy this book.

Briar wondered why he thought it was necessary to assure them of privacy. The whole ranch would know soon enough what he was about to do. Whitey would see to that and Reece hadn’t bothered to hide his intentions from the inveterate old gossip.

Her bottom clenched when she heard the door shut. She remembered how this felt, this ritual of punishment. She had felt it once before, that memorable night when she had stolen Brock’s antique vehicle and gone joy riding all around the ranch. The same feelings of helplessness and outrage came glaring out at her like neon in a dark room, but if she reached further into her mind there was also a backdrop of shame and an often denied canvas of guilt and regret. If she were honest with herself, she would have to say that she knew what she was doing was wrong even as she did it. There were other ways to describe it: selfish, foolish, impulsive, but the overarching term was wrong.

So when he rained down hard hot swats on her upturned backside, it was only half-heartedly that she protested and fought him. She danced up and down on her toes at first, then as the pain built, she bent her knees one at a time. He swatted farther down on her thighs in answer to that move, so she tried to keep her feet on the floor. Those swats to her thighs shot pain through her whole leg, it seemed.

“How could you do something so foolish? There were plenty of other alternatives for you. What were you thinking?” he demanded.

She could only yelp out little replies between clenched teeth. “I don’t know.” and “I wasn’t thinking.” interspersed with “I’m sorry!” and eventually, after a long while, “I won’t do it again.”

He slowed his hand, holding on to her tender rump after every time he spanked as if to hold in the heat he had just produced. “Are you sorry? Do you promise not to do it again?”

He rubbed his hand up and down her legs. “Show me you mean it.”

She knew what he wanted, but to stall for more of a break, she asked, “How?”

“Slide your slacks down to your ankles and put yourself over my lap.”

She hated this duck-walk of shame, as she called it in her own mind. She despised the foolish little steps she had to take with her clothing restricting her movements. He had made her do it the first time he had spanked her, so it was no surprise, but she had been hoping he would have forgotten this technique by now. As she had expected him to do, he went to the far side of the room and sat in a straight-backed chair.

2014-10-05
+admin
Previous: Her True Lord’s Claim by Emily Tilton
Next: Little Scarlett and the Doctor by Rose St. Andrews