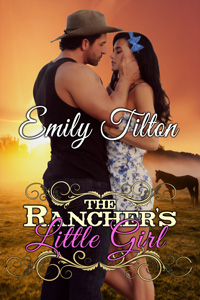 Some might call Victoria Mason ruthless, but she always gets her story, even if she has to sleep with influential men or put herself in danger to get a lead. But when she sneaks onto Senator Bob Austin’s property and snaps some highly compromising photos of the powerful, corrupt politician, Victoria soon finds herself in way over her head.

She goes to a fellow reporter for help, and he suggests she take refuge with a friend who owns a ranch. Upon meeting the handsome, rough-hewn rancher Ross McGregor, she’s none too happy with the way he speaks to her like she’s a naughty little girl in need of a good spanking. But when she gives him a piece of her mind, she quickly discovers that he is not a man to be trifled with and her bare bottom pays the price for her sharp tongue.

Despite Victoria’s shock and humiliation at this childish punishment, when Ross holds her close after her spanking it makes her feel safe and loved in a way she’s never felt before, and she all but melts in his arms. It isn’t long before Victoria knows she’s found something she’s been missing her whole life: a firm daddy who will keep her safe and make her behave like a good little girl. But her new life is going to be a big change, and Victoria will need quite a few more painful, embarrassing lessons along the way, followed each time by care and comfort from her loving daddy.

Ross let go and stood up from the bed. Victoria shuddered as she reached her hands down in front of her waist and undid the buttons of her fly. Being careful to show him nothing but the pert ovals of her bottom, she pushed her tight jeans and her lacy black panties down. When they had reached a point just below the tops of her thighs, Ross said, “That’s enough, darlin’. Now put your hands out and hug the pillow. That’ll help.”

Her face had been turned into that pillow while she pulled down her pants and panties. Now, as she took it in her hands, Victoria turned her right cheek so that it rested there, and she could see Ross, who smiled to reassure her.

“Alright, darlin’, I’m going to start with just my hand at first, because that won’t hurt as much as the belt will, and I want to help you calm down a little. I know you’re scared and I don’t want this to hurt you too much. But you need to trust me. Okay?”

Victoria whimpered again as he laid his work-hardened hand against her bottom, and as he soon as he touched her, a tiny sigh escaped her lips. Without pausing to caress the soft, white skin, he brought his hand down in a firm smack against her right bottom cheek, paused for a couple of seconds, and then spanked her left bottom cheek. “Oww, Mr. MacGregor!” she whimpered, looking back at him, her eyes accusing.

“Darlin’,” he said, stifling a smile, “don’t look at me like that. You know you earned every single bit of this.” With that, he began spanking her a little harder and faster, his palm cracking against her pale rump until every inch of it was pink and beginning to turn red in spots. She offered little resistance—that surprised him, and made him wonder again about what kind of girl Victoria Mason might be, deep inside. When the pink began to turn red, he paused. Victoria gave a little sigh and even seemed to thrust her bottom up at him a tiny bit, as though in a silent plea for more.

He reached to his belt buckle. Seeing it, Victoria gave a little whimper.

“Please…” she said, “not too hard, Mr. MacGregor.” A very different note had come into her voice. That note was very well known to Ross, but he couldn’t help feeling even more surprised to hear it in Victoria Mason’s words. A hint of littleness had entered her demeanor, and thus also their dynamic—not only could he hear the sound of the scared little girl in the way she spoke to him, but her face had set itself in a sweet, penitent expression that seemed to him utterly foreign from the hard journalistic set of her eyes and her chin when she had first entered under his roof just an hour before.

“Don’t worry, darlin’,” he said. “I won’t whip you hard unless you’ve done somethin’ very wrong. As far as I’m concerned, we’re just makin’ sure we understand each other tonight. And it’s your very first whippin’, I know.”

She sniffled in response and gave a little nod. Ross had his belt off now, and he doubled it in his hand, taking hold of the buckle and wrapping the leather around his fist to produce the foot-long strap with which he would punish Victoria, the same way he had punished littles so many times. For Ross, a belt whipping was less personal than a spanking with hand or with hairbrush, but also more paternal and old-fashioned. It was definitely very well-suited to helping Victoria understand what to expect in his house.

Just as important, it kept Ross’ hands off her backside, something Ross felt to be a very good idea, since that backside had made him hard as a rock when Victoria had revealed it. Not that he hadn’t been hard when he’d had to struggle against her to get her down over the bed, and when for a brief moment his fingers had been inside her waistband and he had felt her tender skin and even, he thought, a crinkly hair that might have escaped her panties. He should simply acknowledge it, at least to himself: Victoria Mason turned him on more than any woman had in years—maybe ever.