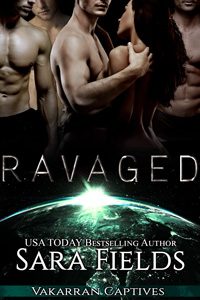 They rescued her. They tamed her. Now they will ravage her.

Though the aliens were the ones I always feared, it was my own kind who hurt me. Men took me captive, and it was four Vakarran warriors who saved me. But they don’t plan to set me free…

I belong to them now, and they intend to make me theirs more thoroughly than I can imagine.

They are the enemy, and first I try to fight, then I try to run. But as they punish me, claim me, and share me between them, it isn’t long before I am begging them to ravage me completely.

Publisher’s Note: Ravaged is a stand-alone novel which is the third book in the Vakarran Captives series. It includes spankings, sexual scenes, intense and humiliating punishments, and strong D/s themes. If such material offends you, please don’t buy this book.

For the first time in my life, I was over a man’s knee getting spanked. My pussy was on full display for Roan, Zac, and Xandaar and my shame at my wetness kept me rooted over Taraik’s knees. My backside burned, aching as though it had been stung by a thousand bees, but still, the spanks fell. I twisted and turned, but Taraik’s palm held me to him, forcing me to take what he was giving me.

I know I had made this happen. I’d intentionally disobeyed him in order to see what they would do. If they would beat me or truly hurt me if I showed a small hint of defiance. I had thought it through. I hadn’t wanted to strike back or truly run away. I’d known they would catch me, well before I reached the entrance of the tent.

Somewhere, deep inside of me, there was a piece of me that wanted them to punish me again, for a second time. I wanted them to chase away the painful memories once again and have them force me to focus entirely on them. I had felt it once and that feeling of freedom was intoxicating. I wanted to feel it again.

Even now, getting my ass smacked by a Vakarran, I felt safe. I knew that none of them were truly out to hurt me. Sure, my backside felt like it was about to catch on fire, but the way he held me and the way his cock was pressing into my belly was nothing like I’d experienced before.

It was far different than anything Neil and his lackeys had done. This wasn’t a punch to the face or a steel-toed boot kicking into my belly. Even as Taraik’s palm smacked down on my ass, for a long moment, he would just hold it there, his fingers curling around my cheek, massaging the hurt away just a little. This wasn’t a beating. Not in the slightest.

With my legs spread wide, I tried to swallow away my shame, but all I succeeded in doing was heating my body even further. Fuck, just imagining myself over his knees and the others watching turned me on.

I wanted more of it.

I lifted my hips and groaned, knowing that my wetness was seeping down my thighs and all four of them could see it, all of it.

Taraik spanked me, slowing down his pace to massage and squeeze my ass, his touch making me feel the ache even deeper in my flesh, all the way into my core. It was incredible, and my clit throbbed in tune to his movements. His cock twitched against my belly and I hoped he would fuck me next.

My skin tingled, a slow blaze beginning to simmer under the surface and I breathed deep, feeling my pleasure begin to rise from the depths of my belly. I panted, moaning softly as Taraik’s fingers ebbed closer and closer to the place between my legs, teasing me as he stroked my punished skin.

“Are you beginning to learn your lesson, little dove?”

“She’s far wetter than before,” Roan observed, and I shivered with my embarrassment, knowing that it was making me burn hotter than ever. I should hate being exposed in such a humiliating manner, but I didn’t. Instead, I was enjoying it far more than I thought I would. Fuck. I wanted more of it.

Taraik’s fingers finally edged close enough to my folds, sliding down my labia and just brushing against my clit. I moaned louder, trying to let him know I wanted him to continue, but even I knew that he would only give it when he wanted to. It wasn’t up to me.

2018-10-05
Chris
Previous: Taming His Cowgirl by Delta James
Next: The Duke and the Thief by Ashe Barker and Jaye Peaches