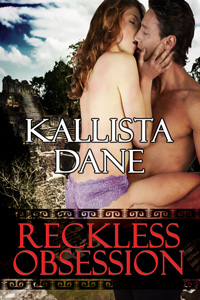 When Dr. Savannah Chambers locates a long-lost Mayan tomb, it seems like the perfect opportunity to put her problems with men out of her mind and focus on her career. Sadly, both her dreams of a man-free existence and the tranquility of her archaeological site are shattered by the arrival of Camaro Kincaid, a former Special Forces commando now working as a hired gun.

Camaro’s partner needs urgent medical attention, and he sees no reason to drive to a faraway hospital when he is lucky enough to have a doctor right in front of him. When Savannah refuses to help, Cam takes the sexy, stubborn beauty over his knee for a firm spanking… until she stops sassing him long enough to explain that her doctorate is in archaeology rather than medicine.

Savannah realizes instantly that Cam is the kind of man to whom she has always been fatally attracted—dominant, arrogant, and drop-dead gorgeous—and when she is forced to pose as his ex-fiancée to convince the people of a nearby village to help his injured friend, she is determined to remain aloof and unmoved by his charms. But her efforts to safeguard both the newfound tomb and the local people from the area’s violent drug lords quickly exposes Savannah to a world far more dangerous than she ever imagined, and it becomes impossible to part with Cam.

Even as she relies on him to keep her alive, Savannah soon finds that she responds to Cam’s firm dominance just as strongly as she does to his wickedly sensual lovemaking. But men like Cam have always walked away from her in the past, and she fears that she’ll be left heartbroken and abandoned once again. Can Savannah allow herself to believe that this time could be different?

“Hey, come back here. I told you I’m not through with you yet.” Cam’s voice held a playful note.

Savannah didn’t bother turning her head. “Yeah, well, I’m through with you.”

Two long strides put Cam halfway across the room, grabbing her by the arm, twirling her around to face him. “You forgot something.”

Icicles dripped from her voice. “Oh, really. What’s that?”

She tossed her head and jerked her arm away. “Yeah. Like that’s ever going to happen.”

He dragged her back to the bed, and pulled her face-down across his naked lap. Savannah kicked and fought, but she was no match for his strength. Without warning, his hand cracked down on her bottom, still tender from last night’s spanking.

He spanked her firmly, but not as hard as he’d done the night before. After half a dozen swats, Savannah burst into wild sobs. Cam stopped immediately, drawing her into his arms. Cradling her on his lap, he stroked her hair as she cried her heart out on his shoulder.

“Hey, babe. This was just a play spanking. I’m not angry with you and I sure wasn’t spanking hard enough to get this kind of response.”

“Yeah, well, I’m angry with you,” she blurted out between sobs. “You… you’re an asshole.”

Savannah choked back a laugh in the midst of her tears and struggled out of his embrace to stand in front of him. “Stop it,” she yelled. “I don’t want you to be all funny and charming. And don’t you dare hold me like that.”

“Like you actually care about me.” She stomped her foot, but the effect was lost when she saw his attention drawn to the way it made her bare breasts bounce up and down in front of his eyes. “Like I matter to you,” she whispered, turning away.

Cam took her hand and gently led her back to the bed. He sat and pulled her down to sit beside him.

“I do care about you, Savannah. You’re an amazing woman. Intelligent, funny, warm, and caring—not to mention a natural-born submissive and a great fuck.” Her eyes flashed and he hurried on. “Just trying to lighten things up a little. Seriously, what did I do to make you think I don’t care about you?”

She kept her head down. “You said there’s no we. It was obvious you had your fun and you’re ready to move on.”

“That’s what you heard? You think last night didn’t mean anything to me? I’m a dom, not a robot. Last night was incredible. I’ve never felt such an immediate connection with anyone. When I said there’s not going to be any we, I meant I’m not going to let you get involved in this mission I’m on. It’s too dangerous. You’re going to go back to the village and sweep some more dust off that pornographic pile of bones of yours. When I’m through with this job, I’m coming back to get you. I plan on having a whole lot more nights like the one we just had.”

2015-03-22
+admin
Previous: Little Sandra and Her Soldier Daddy by Rose St. Andrews
Next: The Marshal’s Little Girl by Ava Sinclair