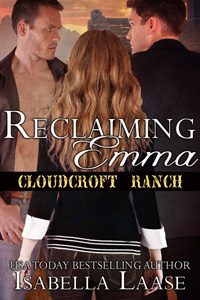 With credit card debt piling up and her marriage seemingly in trouble, Emma Lanyon makes an impulsive decision and flies to Cloudcroft Ranch unannounced to visit her sister. Upon her arrival, however, she is scolded about running away from her problems, and once her husband joins her at the ranch he quickly leaves Emma in no doubt that things are going to change. From now on, when she needs to be taken in hand her bottom will be bared and very soundly spanked.

Over the coming days, Emma is taught to surrender her body to her husband’s demands. His stern dominance arouses her intensely, and when he decides to share her with another man she is brought to heights of pleasure she never imagined. But obedience is expected, and she soon learns the hard way that putting her safety at risk will earn her a truly shameful punishment.

Emma’s desire for both men grows stronger with every new experience and every blushing climax, but will their shared bond endure even when the time comes to leave Cloudcroft?

Javi touched his wife’s naked body, causing her to jump disproportionally to his attention. He slid his fingertips along her sides until he slapped gently at her nipples, pinching them firmly to keep them hard. Her reaction was different than during Dylan’s playtime, less tension and more acceptance, but Dylan had prepared her well. Her twisting began again, but Dylan demanded, “Stop. If you can’t be still while your daddy plays with you, then we’re going to have to add a little punishment.”

Javi chuckled with the useful information. Despite the arousal she’d experienced with Jack, the plug was still a punishment for her, and he would definitely use that to his advantage in the future, but today was about giving her what she needed, not what she wanted. This one was thicker than the one he’d used the first time, but Dylan worked the well-lubricated toy in slowly, a few centimeters at a time.

Emma’s stubbornness increased with each intrusion, until she raised her voice. “I don’t think I like this. It’s too big. Please, take it out.”

“You’re not picking and choosing, little sub,” said Javi, rubbing her clit to help her arousal, her wet reaction pooling in his hand. “You’re here to entertain us, remember. And we find this entertaining. Besides, how do you think you’re going to take two of us at the same time if we don’t train this second hole?” Emma blushed a deep red, but her gaze went to Dylan’s crotch. Despite her verbal protests, she looked almost hungrily at his obvious erection.

She stayed in her trussed position, the warm breezes from the fireplace continuing to heat the room while her arousal grew. Occasionally, one of them would blow gently on her inner thighs, or tickle her nipples or between her legs with a soft feather just to see her squirm, but they quickly discovered that the lighter their touch, the more she reacted as though they’d beaten her, crying out with true begging, her angry, red, swollen clit peaking from its hood to demand attention.

By the time they’d returned to fully play with her, she was lost to reasonable conversation. Javi slipped out of his khakis and shirt and knelt on the bed to settle between her open legs, entering her before Dylan could lose his own clothing and join them. Dylan stood near her head to toy with her nipples, simultaneously rubbing her clit to coax her orgasm as Javi slid along her tight sex, his shaft shuddering against the heat, her hips arching in unison, and the subtle moans showcasing her pleasure. She came with a shout before he did, a roar tearing through her body that he felt around his cock, pulsing and gripping his arousal until he released his own pressure.

Exhausted, he rolled to the side, cradling her back against his chest, but he nodded briefly to Dylan. With a condom-wrapped penis, the man slid inside of Emma, his little wife still aroused, still ready.

“My god,” groaned Dylan. “She’s so fucking hot. She’s still pulsing from her orgasm.” He moved slowly at first, rubbing her clit a second time while Javi held her against his chest, her arms and legs still trussed by their restraints. The second orgasm caused her to exhale with a loud, effective moaning, a sound built from an overstimulated pleasure, Dylan shuddering with the effects from his own release.