Reformed by the Millionaire by Maria Monroe 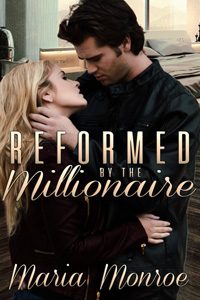 After her plan to drop out of college and travel the country falls apart, nineteen-year-old Daisy Underwood finds herself sleeping on the porch of an upscale home to get out of the rain.

Victor Bennett is surprised to find a cold, hungry young woman on his doorstep, but he doesn’t hesitate to invite the wet, shivering girl inside and offer her a hot meal and a place to stay for the night. When he meets the cleaned up and properly rested Daisy the next morning, he is enthralled by both her innocent beauty and her obvious need to be properly taken in hand.

Daisy is delighted by Victor’s generosity, and when he offers her a room in his home and a job as his assistant she happily accepts. She soon discovers, however, that her handsome new boss will not tolerate laziness or disobedience, and it isn’t long before her careless disregard for his instructions earns her a trip over his knee for a sound spanking on her bare bottom.

Victor quickly proves that he will not hesitate to punish Daisy as thoroughly as necessary to teach her to do as she is told, even if that means her bottom ends up sore both inside and out. Though she is often left blushing crimson by his strict correction, Victor’s dominance arouses Daisy intensely, and when he claims her at last his masterful lovemaking is better than she ever dreamed.  But can she truly dare to hope that she could be more than just a charity case to him?

Publisher’s Note: Reformed by the Millionaire includes sexual scenes and spankings. If such material offends you, please don’t buy this book.

Naked, she felt her nipples harden under his gaze. He motioned with his head for her to come closer, and when she stood right in front of him, he patted his lap. “We’ll finish with you right here.”

She nodded, crawling up onto the bed and positioning herself over his lap. Already she could feel his thick hardness under her thighs, and even though she knew she shouldn’t, she wiggled a little extra as she got into position.

“Hold still.” There was more than a bit of warning in his voice. “Hand me the brush, Daisy, and ask me to spank you with it.”

She hated this part almost as much as the spanking itself. How humiliating it was to have to politely request that someone punish her! But she took a deep breath. “Victor, Sir, please spank me with this brush.” She reached her shaky hand back so he could take the implement from her, cringing at the fact that she was handing him the very object with which he was about to punish her.

“This is going to hurt.” There was unexpected kindness in his voice.

“And you know you deserve it, right?” Lightly, he patted the brush on her bottom.

“Good.” He turned the brush over, drawing the bristles over her delicate skin. “Let’s have you open your legs a little bit.”

No. But she did, pushing one into him while moving the other as far open as she could.

She clenched her eyes shut, but they flew open the second the brush smacked down on her bottom. It stung, and he did it again, and again. After a few moments, she began to cry, both from the pain and the embarrassment. Though the pace was slow, the spanking was hard, so hard that even the sound was a punishment, the room filled with the noise of her naughty bottom being smacked, over and over and over. With each strike, her flesh quivered, and the sound reverberated through the room. Soon she was sore, and pretty sure her cheeks had been turned into a deep, dark red.

When he finally stopped, she was sobbing into the comforter, and yet her whole body felt on edge and amped up, turned on, filled with desire. What a strange sensation, to be hurting and excited all at once. And as the stinging in her bottom lessened by the second, she felt relief course through her until she was in a state of relaxation, still over Victor’s lap, that she’d never experienced before.

His fingers gently soothed her bottom, rubbing lightly, then dipped lower, between her legs, touching her wetness. At first his touch was explorative, but soon grew demanding, a finger entering her as she moaned.

Was it wrong to let a man who’d just spanked her to tears touch her in the most intimate place? She didn’t care if it was; it felt more right than anything else, and her entire body, her entire soul wanted this to happen.

Fingers wet with her juices, he ran them along her clit, then played with it, moving it in perfect time, in perfect circles, until she felt the climax begin. Her body tensed as sensation washed over her, as her orgasm built and built until she crested, then crashed, crying out and writhing against his hand.

2017-09-23
Chris
Previous: His to Own by Ava Sinclair
Next: Cowboy Daddies: Two Western Romances by Amelia Smarts and Jane Henry