Reformed by the Scotsman by Katie Douglas 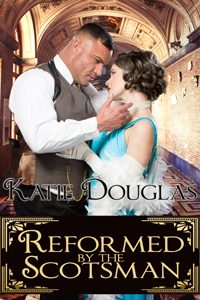 When her scandalous behavior finally forces her wealthy parents to take drastic action, twenty-two-year-old Adeline Hawthorne is sent to Edinburgh to live in the home of her father’s friend Edward Wolstanton. The stern Scotsman is tasked with correcting the recalcitrant young lady by any means necessary, and it isn’t long before Adeline is taken over Edward’s knee for a painful, embarrassing spanking.

Though she quickly discovers that her new guardian will not hesitate to punish her as thoroughly and shamefully as he sees fit—even stripping her completely and applying a leather tawse to her bare bottom when she attempts to escape his custody—Edward’s firm-handed dominance arouses Adeline deeply. She soon finds herself wondering what it would be like to have such a man as her husband, but will he ever see her as more than a wayward girl in need of reform?

Publisher’s Note: Reformed by the Scotsman includes spankings and sexual scenes. If such material offends you, please don’t buy this book.

She said nothing as he left the room then returned with an enamel bowl of water and a bar of soap, which he placed on the desk next to her. When he had dipped his fingers into the water, ready to cover them in soap, she couldn’t resist the impulse to quickly move one of her hands out and shove the water and soap off the desk. The bowl clattered to the floor and the soap landed with a wet thud.

“I was going to put a little soap on your tongue to make the point, but since you’ve thrown the water on the floor I shall simply have to put the entire bar in your mouth.”

“Not bloody likely!” she retorted, certain that she didn’t want the hated soap near her face. Preempting her reaction, he moved his hand to hold her down on the desk a moment before she tried to stand. She shrieked and tried to kick him.

All the while, her body cried out for him to win, to defeat her, to prove that he was truly in control. She wished it didn’t have to end with a bar of soap in her mouth, but she knew she would never submit to his will unless she was certain he would overpower her whenever she didn’t comply. It wasn’t something she seemed to have a choice about, and perhaps that was why she had sworn at him and pushed the bowl off the desk. She wanted to do anything he said, but she needed to know she could trust him to always win, even when she made it impossible.

“Sooner or later you will have to stop acting like this. And it is an act. I remember you as a young lady, when I visited your home. You were kind and polite. You know how to behave properly. For some reason you are choosing not to.”

It was so unfair; he had no right to tell her what she used to be like. When she opened her mouth to speak, he shoved the soap in so it pressed her back teeth open, held her tongue down and pushed against her cheeks. It was so far inside her mouth that it was impossible to rid herself of it. Trying to spit it out only resulted in getting more soap on her tongue. She squeaked through her nose and her eyes widened as it started to take effect. It burned and tasted foul.

While she was thus distracted, he picked up the tawse and brought it down on her defenseless bottom. She tried to rid her mouth of the soap again, but it was stuck between her furthest back teeth, and she only succeeded in drooling on the desk. It was so humiliating that she wanted to cry.

“You will keep the soap in your mouth for the rest of this punishment. Would you like to continue this ludicrous battle of wills?” he demanded. She shook her head in defeat.

He said nothing more, and the tawse landed an eleventh time. The burning stripe landed over the top of some of the earlier ones, and made her bite down a little on the soap. Five strokes were left, and she already couldn’t bear it. If only she had kept her silence. She fervently hoped the tawse would break on the twelfth stroke, but it remained strong and hard as it cracked against her bottom. Even though Edward was being stoic about this, she was sure the sadistic tawse was delighting in its handiwork.

She shifted her weight slightly and was reminded of the growing wetness between her thighs, as the thirteenth lash found its home on the crest of her buttocks and she howled some more. There was a stray thought that desired him to do something more than this, to show her his complete mastery of her body, but she wasn’t entirely certain what she needed from him.

2017-08-06
Chris
Previous: The Dragon King’s Pet by Loki Renard
Next: In His Custody by Morganna Williams and Jack Crosby