Reformed for the Senator by Emily Tilton 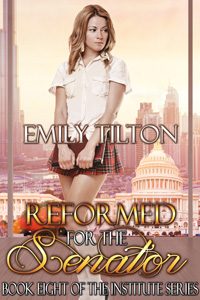 When eighteen-year-old Jessica Dering is caught pleasuring herself with the assistance of her best friend, both girls are sent to a government academy for young women in need of correction and reform. Once there, Jessica quickly discovers that she will be trained not only in obedience, but also in complete submission to the desires of the rich, influential senator to whom she will eventually be given.

Jessica’s new life at the academy begins with a deeply humiliating medical examination at the hands of a strict doctor, and her attempts to avoid the embarrassing procedure merely earn her a sound spanking on her bare bottom. After her responses to intimate stimulation are thoroughly evaluated, Jessica is warned that any off-limits sexual exploration will be sternly punished.

Despite her best efforts to remain defiant, as Jessica’s training begins she finds herself helplessly aroused by the ever more shameful demands of the academy staff, especially the handsome, masterfully dominant dean of students, Kevin Logan. But with Kevin’s need to claim Jessica as his own growing more obvious by the day and a powerful organization seeking to manipulate the situation for their own purposes, will the future of the entire academy be thrown into chaos?

Without ceremony he upended the girl over his lap, so that the gown fell away, exposing her shapely, white-cotton-covered bottom. He heard Erin, across the room, give a little gasp as he pulled down Jessica’s panties all the way down, past her knees, so that they slid to the floor.

“You won’t be needing those again until I’m done with my exam,” he said. Then he started to spank the little bottom, as Jessica emitted sharp cries of pain.

He held her around the waist with his left hand outside the gown, and brought his right hand down in the center of Jessica’s rear end ten or twelve times before he said, “Erin, while I’m spanking Jessica, please remove your own underwear and get up onto one of the exam chairs.” He kept spanking as he spoke, and Jessica began to struggle and kick, since he was spanking hard now. The bruises from her father’s belt had mostly faded, but they clearly gave her some lingering pain.

“Hold still, Jessica,” he said, “and accept your punishment,” not stopping the hard, quick swats that filled the room with their sharp sounds.

“No more, please, doctor,” she wailed, and now he could hear the note of yielding for which he had been waiting. He stopped, and laid his hand atop her now-glowing-pink bottom-cheeks.

“I feel sure you’ve learned your lesson, honey. Pick up your panties and put them with your other clothes, then take off your bra and hop up just like Erin. Erin, you can go ahead and put your feet in the stirrups. I’m going to be having a look inside you girls, in both your vaginas and your anuses.”

He went to the little sink in the corner to wash his hands, watching the girls in the mirror as Erin did as he had told her, with her cheeks almost as red as Jessica’s bottom. Her sweet red-haired pussy came into view as she lifted and spread her legs. Steven caught Jessica peeking at it—how could she help it?—as she awkwardly removed her bra, giving Steven an adorable view of her pert young breasts when the gown inevitably fell down a little.

“Your feet in the stirrups, too, Jessica. I want you both spread nice and wide while I talk to you about your bodies, and then I’ll go ahead and shave you down there.”

The girls exchanged a wide-eyed look, though Erin seemed a little soothed by the thought that they would both have to endure the humiliation of that posture together. No longer willing to question, Jessica did climb onto the exam chair on the right, and soon Steven had the very welcome view of two pretty eighteen-year-old pussies between widely spread thighs.