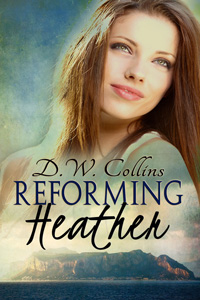 After her relationship with her controlling stepmother hits rock bottom and her behavior lands her in potentially serious legal trouble, nineteen-year-old single mother Heather Clarke is almost out of options. Her only choice is to bring her young son and start over somewhere new, and so she accepts the offer of a good friend of her now deceased father to come and live with him at his home on an island in the middle of Lake Michigan.

Heather soon learns that her new life will be very different from her old one. Her host, Steven Baxter, makes it clear right away that while she is under his roof she will be expected to behave like a proper young lady, and that failure to do so will earn Heather a long, hard, bare bottom spanking. In spite of his strict rules and his being nearly twice her age, Heather soon finds that her feelings for Steven are growing quickly. Can he be the man she needs to turn her life around, or will he refuse to see her as anything but a naughty child?

“You will not be beaten,” he said as he tried not to chuckle at her silly act. “I am going to spank you, and I hope you will learn a valuable lesson. I sincerely want you to become a young woman that your father and mother would have been proud of if they had not tragically died.” He pulled her to her feet and took a chair. “Get across my lap, young lady.”

Her trembling surprised him. She felt smaller than he had expected, but recalling her vulgar words from the day before steeled his determination. He grabbed her gown’s hem and bared her round bottom.

The chill of the morning air on her exposed skin made Heather frantic. “Stop! You have no right to do this. I am not your daughter.” The little girl had been replaced by the outraged teen. She did not count on the fact that this persona would be a lot easier to spank. Her next words made warming her ass easier still. “I am a grown woman, a mother, you have no right to strip me naked.” She had a marked tendency to exaggerate any situation she did not like. Steve had only bared her from the waist down.

Steve’s hand crashed down on the whining mother’s round butt. “Stop complaining and start counting. Before she could react he began alternating spanks with words. I, SPANK, am, SPANK, going, SPANK, to, SPANK, teach, SPANK, you, SPANK…”

“That is seven,” she wailed before he could sear her bottom again.

He considered telling her that the first blows would not count because she had been too slow to speak, but he chose to admire her spunk instead. Her bare bottom took on a rosy glow. He gave her six more searing licks that she counted dutifully. Up to this point, she had kept her legs clamped modestly together, but the next six blows set those shapely limbs into frantic motion. She kicked wildly as the fire in her bottom began to rage, and each of her carefully concealed feminine charms quickly came into easy view. He administered another dozen hard spanks. Her bottom was deep red and blotched from his well-deserved chastisement. Her frantic sobbing and discolored skin told him that he was close to punishing her enough.

Steve Baxter had not spanked a physically mature female since his wife, Amber, had died, and this disciplinary session was creating a serious and unexpected problem for him. His intentions had been completely pure. This young woman was his solemn responsibility, and he would never take advantage of his authority to molest her in any way. Still, he was a man, and pretty young Heather was very attractive. His intentions had been pure enough, but his penis was shamefully stiff. He prayed that she could not feel his guilty bulge as he pulled her to her feet and made her quickly face away.

“Stand facing the lake and keep your gown held high,” he croaked. His mouth was very dry. “You need to think about what you did so you can learn from this punishment. If you dare to move, or touch your bottom, or drop your gown…” He needed to decide what to say next. Suddenly the obvious solution flashed into his mind. “If you misbehave, I’ll bend you over that porch rail and whip your thighs with my belt.”

Heather gasped and pulled the gown a couple of inches higher to avoid earning any more pain. Her bottom was so sore that she actually forgot about the humiliation of being exposed in front of this stern stranger.

2012-11-19
+admin
Previous: Pleasing The Colonel by Renee Rose
Next: The Lady and the Sheriff by Carole Archer