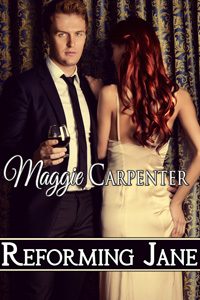 Smart, sexy, and sly, Jane Campbell lives by her wits. She’s a gifted hustler who can pick pockets and play long cons with equal skill, and she does not make mistakes.

But her next mark, Henry Gibson, quickly proves more than her match. After being caught in the act of stealing from him, she must make a choice: submit to a painful, embarrassing spanking or face the police. To her shame, the stern chastisement excites her more than anything she has ever experienced.

Though she tries to hide it, Jane’s helpless arousal during her punishment makes it abundantly clear to Henry that she would benefit greatly from his firm-handed dominance on a regular basis. He is more than ready to give her exactly what she needs, but taming a woman used to manipulating everyone around her will be no small feat, and it may require quite a bit more than just a spanking.

Will Henry prove up to the task of reforming Jane?

He placed the satin scarf around her head, but she felt him tie it at the side, not the back as he’d done before. What did it mean? His hands were suddenly gripping her calves, and to her astonishment, he raised her legs and brought them across her body and over her head. As he secured the shackles around her ankles to the ones at her wrists, she let out a grunt of protest. He had placed her in an uncomfortable and extremely lewd position.

“There, all your lovely charms laid open.”

“I feel so…” she whispered, unable to finish the sentence.

“So exposed? That’s because you are,” he said, smoothing his hand down the back of her thigh and across her upturned cheeks. “I can inspect you, I can explore you, I can spank you, I can do whatever pleases me.”

“I think we should make sure,” he said, cutting her off. “Don’t go anywhere, I’ll be right back.”

“Don’t go anywhere?” she quipped. “You mean, like, bounce down the stairs and out the front door into the snow on my back?”

Sharp smacks instantly landed on each cheek. She yelped loudly, but when he tickled her anus, she squealed out in protest.

“Cheeky Jane, silly girl, I don’t think you should be testing the waters right now, do you?”

Henry’s cock had surged to life, and stepping away from the bed, he began to remove his clothes, staring at the splendid sight as he did. He’d been amazed at their compatibility. Everything he’d thrown at her, she had embraced with abandon. He felt alive, energized, and excited. Was it true joy he was feeling? Moving into the bathroom, he retrieved the thermometer, dipping it into a jar of coconut oil. Ambling back to her, he wished she could see the grin on his face, but he wanted her focused, and focus was what the blindfold provided.

“Let’s see just how hot you are,” he crooned, touching the end of the thin, oiled glass tube to her most private part.

2016-05-28
+admin
Previous: Daddy Takes the Reins by Kelly Dawson
Next: Mastered by the Millionaire by Dinah McLeod