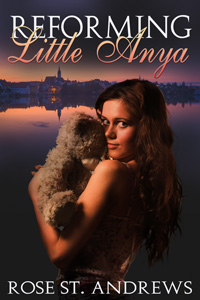 After a gas main explodes in a quaint Czech village while she is visiting on a business trip, twenty-eight-year-old Jessica awakens in the hospital. To make matters worse, someone else’s ID was found near her after the blast—that of a young woman with features very similar to her own—and the doctors at the hospital believe her to be an eighteen-year-old girl named Anya.

Upon learning of the ID mix-up, Jessica’s boss, who recently found out that Jessica was plotting behind her back to usurp her position within the company, conspires to have “Anya” sent to a home for troubled young women. Rules in the home are strictly enforced and Jessica soon learns that if she disobeys, she will be soundly spanked. A sore backside is far from the only means by which lessons are taught at the home, and naughty girls often end up with faces blushing as red as their well-spanked bottoms. In spite of it all, the more time she spends at the home, the more Jessica finds herself secretly enjoying being loved and cared for like a little girl.

When her boss finally calls an end to the charade and flies Jessica’s ex-boyfriend Drew to the Czech Republic, Jessica admits to Drew that she would like to begin a relationship with him again, but this time she would like him to be her daddy. He readily agrees, but when he begins instituting rules and consequences for breaking those rules, Jessica wonders if she is in over her head. Will her love for Drew continue to grow even as he corrects his little girl’s behavior with a firm hand?

“All right, little girl, I want you to say who you are and where you’re from, right here in front of everyone,” Viktor ordered, not letting up for a second.

Viktor stopped, but did not release her. “Very good. That was your first punishment, Anya.”

“This first spanking over your skirt was for running away,” he explained, and then flipped her tiny skirt up. “The second is for lying about your parents staying here!”

Jessica gasped, both at the prospect of getting another spanking and that her little white cotton panty-clad bottom was on display to everyone.

Smack! Viktor’s hand resumed spanking her already sore ass. Jessica bucked and heaved as hard as she could, trying to wiggle out of range, but Viktor was far too big and strong to escape. Wave upon wave of pain rippled through her poor behind, and she wailed, even as she threw back her hands to block. It was a pointless gesture; he deftly pinned her hands behind her back, and barely missed a beat in the spanking.

“Are you ever going to tell lies about your parents again?” he scolded.

If she had been capable of rational thought at that moment, Jessica would have found it a touch ironic that she had essentially just promised to do exactly that: lie.

Then came the next pause, and Jessica gasped as she felt something ominous swirl across her blazing backside: a paddle! She swallowed hard. Oh, God, I’m going to die, right here, right now, I’m going to be beaten to death.

“And now, Anya, you get the final punishment, this is for your big lie: that American story again.”

“No, pleaseeeee, I can’t take more,” she begged.

Whack! The paddle landed. Jessica screamed and tried to break free. She kicked her legs, for all of about four seconds; Viktor easily clamped her tiny legs between his muscular thighs. After that, she was pretty much helpless, and soon the tears flowed freely. It wasn’t long before she lay broken across Viktor’s lap, simply bawling at the top of her lungs; she wasn’t even aware that the paddling had ended for a good five minutes.

2014-05-06
+admin
Previous: Bred by the Spartans by Emily Tilton
Next: Maggie Meets Her Match by Dinah McLeod