Reining in Riley by Claire Britain 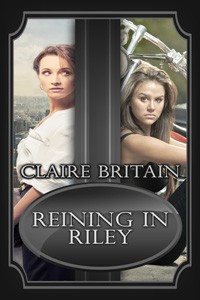 When Joanna Armstrong hires Riley Carrington to work for her company—one of Los Angeles’ most prestigious advertising firms—she knows she’s taking a risk. With her sharp tongue and defiant attitude, Riley seems bound for trouble, but there’s something special about her that Joanna can’t bring herself to pass up.

After Riley insults one of the company’s senior partners, however, Joanna decides that what the beautiful, free-spirited twenty-seven-year-old needs is structure and consequences. Riley faces a suspension without pay for her misconduct, and when Joanna offers her an alternate proposal she hesitantly agrees. She will work for Joanna at her home office, but first she’ll submit to a thorough, no-nonsense paddling, and any future misbehavior will earn her more of the same, this time on her bare bottom.

Joanna’s firm-handed discipline turns out to be just what Riley has been missing, and soon they have become much more than just boss and employee. Yet despite Joanna’s best efforts and Riley’s frequently sore bottom, her wild and careless behavior continues and before long a motorcycle accident almost claims her life. Joanna takes it upon herself to care for her girlfriend, though her treatment often leaves Riley blushing crimson, but once Riley recovers will Joanna be prepared to do whatever it takes to rein her in before it is too late?

Joanna started a steady flurry of spanks to Riley’s behind, alternating cheeks and covering Riley’s backside from top to bottom. Riley could feel the heat building as the stinging slaps began to renew her arousal and she moaned in response to the fire building on her behind and between her legs. Joanna smiled and decided it was time to cool Riley off a little.

Joanna raised her arm high and brought it down with ferocity on Riley’s cheeks over and over in a steady rhythm that had Riley bucking and writhing on Joanna’s lap in an attempt to avoid the assault.

Joanna stopped and put her hand on Riley’s hot bottom. “Are you ever going to do that again?”

“No, I promise, please!” Riley whimpered, looking up behind her to see what implement was causing the wicked sting, only to see Joanna’s hand.

“That was just my hand, Riley, and let me assure you that was only half of what I’m capable of,” Joanna assured her, applying a few harder spanks to Riley’s behind again. “Do we understand our positions now?”

“Very good, but I’m not done with you yet,” Joanna said as she guided Riley up off her lap.

Riley’s hands immediately flew to her backside, frantically trying to rub the sting away.

Joanna grinned as she watched Riley. “No rubbing!” she said as sternly as she could over her amusement, making Riley jump and put her hands at her side.

“I want you to go to the bed and lie face down, and don’t you move until I tell you.”

Riley looked deeply into Joanna’s green eyes, a crooked grin appearing on her face as she went compliantly over to the bed.

“Wait, that shirt, I want it off,” Joanna commanded.

Riley turned to face Joanna and grasped the hem of her nightshirt, slowly pulling it up over her stomach then to her small breasts seductively and eventually off over her head. Joanna nodded her approval as she went to her dresser and removed a silk scarf from one of the drawers. She pointed at the bed and Riley climbed on, lying face down. Joanna admired her handiwork and ran a finger over Riley’s bright red behind, making her shiver. She folded the scarf and tied it around Riley’s head in a blindfold, a satisfied smile on her face as she left the bedroom.

Riley’s arousal was as intense as the sting she still felt on her bottom. Even though she wanted to rub out the sting, the invisible bonds of Joanna’s instruction left her in submission and the anticipation made her heart race.

Riley could see nothing but she heard Joanna return to the bedroom and her heart pounded in her chest and her bottom cheeks clenched in anticipation. She felt Joanna sit on the bed next to her and she held her breath.

2015-11-15
+admin
Previous: A Legacy of Dominance by Emily Tilton
Next: Myka and the Millionaire by Alexis Alvarez