Rescued by the Buccaneer by Normandie Alleman 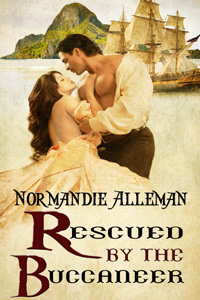 When Frederica Beauchamp boards a ship for the Americas, she dreams of a life filled with adventure, but she gets more than she bargained for when her passenger ship is attacked by pirates. The heartless men kidnap her and force her to serve their captain—a fate that might be worse than death, since though he does not have his way with her, the captain delights in baring her, shaming her, and thrashing her bare bottom as punishment for every imagined disobedience.

After the pirates bring aboard an injured man found floating in the sea, Frederica tends to his wounds and learns that he is Gaston Galette, a survivor of a shipwrecked vessel. Gaston seeks her help to overthrow the vile captain, but when their plan goes awry he is forced to use all of his wiles to save them. As the naïve girl and the seasoned sailor navigate one perilous situation after another, he informs Frederica that the only way they can survive is if he is in command, and that if she thinks things can be otherwise, she will be taken over his knee for a bare bottom spanking.

As he watches the proud, willful Frederica bow to his authority, however, Gaston worries that her growing hold on his heart will be his downfall. He knows he cannot take a woman with him when he returns to his ship and crew, but when Frederica accepts his lustful dominance completely, submitting to him with grace and beauty no other woman could match, Gaston realizes that he may never be able to let her go.

“Stop this impertinence at once! Turn me loose, you scoundrel!” She attempted to get up, but he held her down. The dank, musty odor of the cell accosted her nostrils.

“I shall do no such thing, at least not until you’ve been properly reprimanded for your betrayal.”

She exhaled loudly. “I did nothing, I tell you! Now let me go, you letch!” She wriggled again, this time with less gusto.

He smoothed her cheeks with his palm, ignoring her pleas. “I do like the access this provides me.” He dipped his hand between her legs, caressing her inner thighs.

She took a deep breath and a slight moan escaped her lips as she exhaled.

“I can see that you’re wet,” he said, then whispered, “I knew all along you were a lascivious lass.”

“I shall do no such thing. It’s time for your punishment, no more stalling. A good spanking is precisely what you need, my girl.”

She shrieked in protest, but that did not stop his hand from landing on her bottom with a loud slap.

The blow jarred her, and she reached for his leg nearest to her. She grabbed it with the intention of biting him, but thought better of it. Instead, she clutched his muscular calf through his pants leg and closed her eyes.

He smacked her bottom again. Pain seeped across her skin and she tried not to cry out. It wouldn’t do to give the man the satisfaction of hearing the agony in her voice.

He swatted her aching rear over and over again, and her ass felt as if hot coals lay upon it. She longed to push his hands away, for the blows to cease, but she stubbornly refused to scream.

Then he stroked her buttocks, easing the discomfort. “Now, my little captive, can you behave?”

2014-03-03
+admin
Previous: Katy In Control by Grant Antrews
Next: Their Firm Men by Emily Tilton