Returning to Her Master by BJ Wane 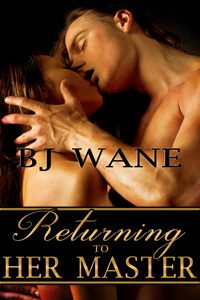 Marc Taite is shocked when Cassie Edwards, the only girl he’s ever loved, suddenly shows up in the club room of his Colorado vacation lodge for the first time since she broke off their romance without explanation and refused to answer his calls. He hauls her upstairs with the intention of spanking her soundly and then getting some answers, but when their old passion flares to life he ends up taking her up against the wall instead of taking her over his knee.

The connection they once shared clearly still exists, but Marc has already lived through the pain of losing Cassie once and he is determined not to let himself be hurt again. Desperate to prove that this time she is truly ready to belong to him, Cassie promises Marc her complete submission, and she soon finds herself on her knees with her bright red bare bottom on display as she begs him to claim her in any way he pleases.

Though he is reluctant to risk his heart again, Marc’s need to protect Cassie quickly overcomes his hesitation after he discovers that a stalker has followed her to Colorado. He takes it upon himself to watch out for her, punishing her sternly when she disobeys the rules he makes to keep her safe, but when a misunderstanding leads her to flee from him will he lose her a second time?

He landed a hard smack on her right cheek, raising instant, pulsing heat and she felt his cock harden even more. “Yes!” She could no more stifle her cry than she could prevent from lifting for the next swat and almost weeping with the pleasure sweeping her senses from the stimulating pain. His swats sped up, became harder, until he had covered her butt several times. Pausing only long enough to shove her shorts down further, he then aimed for her thighs, raising a throbbing burn along the tops before returning to her buttocks.

“I don’t like ultimatums,” Marc said, his hand smacking her again, the heat of her flesh reminding him of the warmth of her pussy when she clamped around him. “But I like less the worry I’ll have to live with each night if you’re here alone.” He spanked her twice right in the middle of her ass before dipping between her legs and running his fingers over her drenched, swollen folds.

“Sir,” she groaned, and even though he suspected the title slipped out without thought as she arched into his hand, it gave him a moment of unguarded satisfaction.

“I don’t think so.” Though tempted to give her an orgasm, pleasing her would not suit his purposes right now. Lifting her up, he stood and undid his jeans. With a sigh of relief, he freed his aching cock into his hand, those bright blue eyes filling with awe and unfulfilled desire nearly his undoing.

He managed to hold back by sheer willpower. “On your knees.” She once again surprised him with her immediate obedience, sinking to her knees in front of him. “Put your hands behind your back and use only your mouth on me.”

Bending her head, she closed her eyes, savoring his taste as she wrapped her lips around his girth and took him deep. With her arms behind her, the position was awkward and a struggle to hold, but it didn’t keep her from stroking him with her tongue, tracing every ridge before swiping over the smooth crown and tasting his pre-come. When he took control by clasping her head, she took him deeper, hollowing her cheeks and sucking hard. His low groan of pleasure encouraged her, his hands guiding her head helped steady her in the awkward position, enabling her to concentrate solely on pleasing him.

Marc thought she made a beautiful sight with her shorts still down around her knees, her ass bare and red, and her mouth filled with his cock. Unable to hold back any longer, he thrust into her once, twice, three more times before exploding, his release shooting down her throat as a storm of sensations erupted from his balls and left him panting.

She released him with a pop, licking her lips as she looked up at him with a pleased smile. “Did I pass your test?”