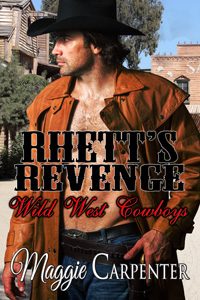 Deputy Sheriff Rhett Cooper is heartbroken when Katherine Foster, the young lady he has been courting, falls prey to the scheming of a rich, dapper con man. Though he takes the impetuous girl over his knee and spanks her bare bottom soundly, his strict chastisement and stern warnings do not dissuade her, and she runs off to San Francisco in the scoundrel’s company.

When Katherine finally returns home six months later, arriving in town in a fancy carriage with the arrogant, smooth-talking rogue at her side, it quickly becomes apparent that she is quite ill. Rhett soon learns foul play was involved, and he sets out to rescue the woman he loves and bring to justice the man who hurt her.

In spite of Rhett’s demand that she leave the matter to him, as soon she regains her health Katherine puts herself in jeopardy yet again by attempting her own revenge. Determined to rein her in, Rhett punishes Katherine thoroughly and then claims her properly, and soon their passion for one another is burning hotter than ever before. But even if he manages to keep his woman under control, can a small-town lawman win a battle of wits with a clever, ruthless criminal?

“You were about to run off to San Francisco with him, and you don’t think he’ll kiss you once you get there?”

“I won’t let him,” she lied, knowing full well she’d almost kissed him the last time they’d been together.

“I dunno what’s happened to you, Katherine Foster, but…”

Suddenly grabbing the waistband of her drawers, Rhett did the unthinkable. His adorable, sweet Kate, the girl he loved, the girl he wanted to marry, was being seduced by a man he was sure was a scoundrel, and she was lying to him. He wasn’t having it. If she didn’t want him anymore so be it, but he would not allow her to become victim to the man in the hotel, nor would he allow her to turn into a duplicitous, dishonest woman. With a sharp tug of his hand the cotton fabric ripped away, exposing her naked bottom.

He’d intended to launch his hand immediately, but his eyes made him hesitate. Her bottom was beautiful, and as his gaze roamed over her plump, curvaceous cheeks he could feel his cock stir. He loved her. He loved her desperately, and she was breaking his heart. He was suddenly filled with swirling emotions. He wanted to push her off his lap and stomp away; he wanted to gather her into his arms and profess his undying devotion and beg her to marry him; he wanted to lay her on the floor and thrust his manhood into her depths as he fervently kissed her; he wanted to do all of those things, but most of all he wanted to save her from the clutches of the nefarious stranger who was so cleverly inveigling her. Rhett had no doubt that Nate Johnson was a conniving, despicable character who would use her then toss her aside. She had to be brought to her senses.

“Katherine Foster,” he said stridently, landing a solid smack, “are you listenin’?”

“Why did you have to rip my underwear?”

“You need to be properly punished,” he replied, landing another. “Now I’ll ask again. Are you listenin’?”

“That man is a schemer and he’s filled your head with nothin’ but foolishness. I’m gonna spank your head back on straight, then I’m gonna fetch your pa and we’re gonna have a long talk.”

His punishing palm cut her off, landing with a hot slap in the center of her bottom, quickly followed by a second and a third, and as the spanking continued, though she wailed and kicked and carried on, her protestations fell on deaf ears. Only when her bottom was scarlet did he stop, then pulling her into his arms, he held her on his lap, doing his best to comfort her as he listened to her whimpers.