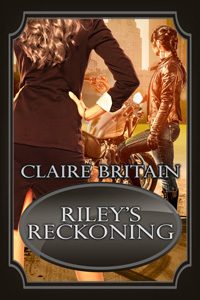 Twenty-eight-year-old Riley Carrington has always been a daredevil, and though her girlfriend and boss, Joanna Armstrong, has done the best she can to tame her with the help of a paddle applied to her bare bottom as often as necessary, Riley’s reckless behavior has persisted.

Though she spends far more of her time than she would like with her nose in the corner and her backside on fire, being made to surrender her naked, quivering body completely to Joanna’s intimate, practiced dominance never fails to leave Riley blushing and sore yet deeply satisfied.

But when a stalker sets his sites on Riley and she takes it upon herself to bring him to justice, no matter the risk, will her disregard for her safety end up tearing her romance with Joanna apart?

Publisher’s Note: Riley’s Reckoning is a stand-alone sequel to Reining in Riley. It includes spankings and sexual scenes. If such material offends you, please don’t buy this book.

Riley’s lip began to tremble, so she turned and headed toward the bedroom. It didn’t take her long to find the belt Joanna had told her to retrieve. She took it off the hook and held it in both hands, running the supple leather that was about an inch and a half wide through her fingers. She wasn’t afraid; if anything, she was more than ready to accept whatever Joanna had in store for her, as she stared at the leather strap in her hands.

“Bring it here, Riley,” she heard Joanna demand, bringing her out of her trance.

Riley looked out from behind the closet door and saw her girlfriend sitting on the bed. She didn’t hesitate as she headed over to the bed to face Joanna. Joanna held out her hand and Riley threw the belt into her hands with a huff.

“Yes, I do, can we just get this over with?” Riley asked, not making eye contact with her lover as she hooked her thumbs in the waistband of her running pants and began to peel them down.

“Whatever, just do it already,” Riley replied, her running pants now at her knees as she began the same process with her panties.

Before Riley could dispense with her underwear, Joanna reached up and grasped Riley by the ear and steered the younger woman down over her thighs. Riley felt her panties being pulled up tight, exposing her nether cheeks then Joanna began a flurry of crisp, fast spanks as her girlfriend lectured her.

“You, young lady, will do as you are told, otherwise we are going to be here a very long time. Do you understand me?”

Riley didn’t answer Joanna; even though her backside was starting to burn, she knew this was only a mild prequel to what was coming. Joanna had taught Riley about the warm-up ritual. She had explained about the importance of getting in the right headspace and learning to submit, and right now Riley was nowhere near either one. She made this abundantly clear to her dominant girlfriend by almost taunting her about the opening act she was delivering to her behind.

Joanna stopped the spanking and gave a heavy sigh.

“Get up, miss, you are going to spend some time thinking about this,” Joanna declared, righting Riley to her feet.

Riley scowled and adjusted her panties that were uncomfortably wedged up between her stinging cheeks. She glared at Joanna and began to pull up her running pants. Her anxiety and frustration were manifesting in the form of anger.

“Leave them, in fact take them off, naked from the waist down and in the corner now.”

2018-11-03
Chris
Previous: His Little Bride by Aurie Jameson
Next: Taking His Mate: An Alpha Shifter Romance by Delta James