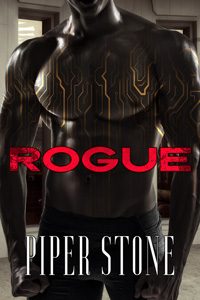 A single purpose compels him. He must find me, claim me, and master me completely.

Tracking down cyborgs is my job, but this time I’m the one being hunted. This rogue machine has spent most of his life locked up, and now that he’s on the loose he has plans for me…

He isn’t just going to strip me, punish me, and use me. He will take me longer and harder than any human ever could, claiming me so thoroughly that I will be left in no doubt who owns me.

No matter how shamefully I beg and plead, my body will be ravaged again and again with pleasure so intense it terrifies me to even imagine, because that is what he was built to do.

Gripping her hips, I yanked her off the table, forcing her legs around my thighs. I used very little strength to keep her aloft, rocking my hips as I slid in and out. Her wetness was incredible, her cunt grasping my cock, clinging as her own passion had yet to be satisfied.

Her eyes remained wide open as the fucking continued, the sly smile on her face a powerful aphrodisiac. Easing her down, I cupped her buttocks with both hands, changing the angle once again.

Noire clung to me, her fingers firmly gripping my shoulders. Sweat beaded along my hairline, seeping down both sides of my face. I was electrified, so damn alive.

Then she did the unexpected.

Her punch in my gut caught me off guard and in that split second, I let go. She scrambled as she hit the floor, crawling desperately in an attempt to get away. Chuckling, I had her hair in my hands within two seconds, dropping to the hard concrete.

Noire struggled, whimpering and groaning as I smacked her ass cheeks, moving from one to the other.

“You bastard!” she yelped, throwing first one arm then the other behind her. She was a fighter, managing to get her leg from between mine, kicking me until I released my hold, crawling another three feet.

My desire was to the boiling point. This woman would be taken my way. She rolled in an attempt to get away from me, but it was no use. Pinning her down again, I slammed my cock inside, pummeling in and out.

She groaned with every hard plunge, her body rocking forward and backward. “Oh…”

Her strangled whimpers becoming moans, I gripped her hips, driving into her like a crazed animal. There was no stopping my actions and soon, she fell into my rhythm, even pushing back against me, thrust after thrust. She clawed the concrete, tossing her head from side to side.

I had no sense of how long I kept up the raging pace. I was simply a machine, taking the woman who belonged to me.

“Rogue…” she finally whispered, the lilting voice full of intense desire. We were dirty, covered in grime and dirt, cobwebs and bits of debris, but there was no denying our powerful needs. “Take me. Use me.”

The words were like rocket fuel. Gathering her into my arms, I carried her back toward the desk, pushing her over at the waist. There was another hole I’d yet to take.

And it would be mine.

My cock slickened from her juice, I slipped the tip into her asshole. Her muscles expanded, accepting, begging for more. I pushed in to the point of no return, hitting the hard muscle and thrusting past. “Fuck!” The word bounced off the walls as I thrust in and out, my balls swinging and aching to the point of blinding anguish.

The caged beast was free, taking what belonged to him.

I plunged even more brutally until I knew I would explode. All time seemed to stand still as I finally allowed the orgasm to rise from the very depths of my being. My body shaking violently, I released, flooding hot seed into her dark hole.

This was just the beginning.

I had more that I needed to do.

I had more I was required to do.

2019-04-13
Chris
Previous: His Human Claim by Stella Rising
Next: Kept for Their Use by Ivy Barrett