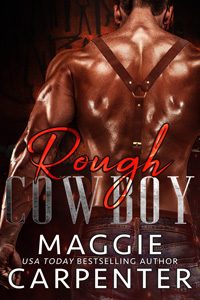 He’s big, he’s rough, and when he takes the reins he’s going to ride her hard.

When Megan Newman took a job shoeing horses at the Hammer and Nails ranch, she knew she’d be working for a tough, old-fashioned cowboy. She didn’t expect to be threatened with a trip over his knee for disregarding basic safety precautions, and she definitely didn’t plan on finding out what it feels like to be ridden so roughly she’ll be sore for days with her bottom still bright red from the spanking that left her in such desperate need of a hard ride in the first place.

Megan could try to tell herself she’s only sticking around because she’s fallen in love with a horse, but she knows that isn’t the truth. There is a beautiful animal with an uncaring owner and she has a plan to rescue it, but that isn’t what’s keeping her at Hammer and Nails. She’s still there because she needs breaking in, and there’s only one cowboy she trusts to take the reins…

As his frightening, thrilling promise swirled through her head, he dove his mouth against her pussy, devouring her sex the same way he’d devoured her lips. Unable to stop from yowling as he sucked, tongued, and tormented her clit, she abruptly gasped as he thrust a finger inside her and vigorously shoved it in and out. He was utterly possessing her, controlling her responses with every lick and every charge of his long, thick finger, but as he pulled away and placed his cock at her entrance, she held her breath.

She’d expected him to plunge inside her, but he pushed slowly forward, and closing her eyes she let out a long, joyous groan. He began to stroke, the rough fabric of his jeans rubbing against her scalded skin. Naked and helpless, her wrists tied and his giant cock owning her, she knew he would use her however he wished, for as long as he wanted.

Feeling him clasp her hot, prickling backside, she was powerless as he spread her cheeks. Her breath ragged, her face flaming as red as her punished behind, she turned her face into the pillow. He suddenly slowed, but only for a heartbeat. Bringing his cock back, he plunged forward, staying buried inside her as she let out a muffled cry, then languidly withdrew. She waited, readying herself for the next.

His cock sat at her opening, tantalizing her, but motionless.

She bucked back, and was met with a hard slap.

“Please…” she whimpered, lifting her head.

“Who’s in control?” he demanded, pushing in barely an inch.

His engorged cock pitched forward, evoking a wild wail, then paused, and leisurely pulled out. So it continued, each pummeling lunge eliciting a cry, until he stayed buried inside her and roamed his hands across her cheeks.

Turning her face to the side, she took a breath. Every nerve in her body sparked, her skin tingled, and she could feel her climax hovering, as though waiting for its short fuse to be lit. Opening her eyes, she glanced back at him. Still fully clothed and looking larger than life, he loomed over her.

The monstrous climax rose up inside her, then launched its crackling energy. Glorious sensations vibrated through her body, lightbulbs flashed through her brain, and endless spasms rippled across her muscles, until waning, they left her limp and breathless.

2019-07-27
Chris
Previous: Her Forever Daddy by Meredith O’Reilly
Next: His as Payment: A Dark Mafia Romance by Piper Stone