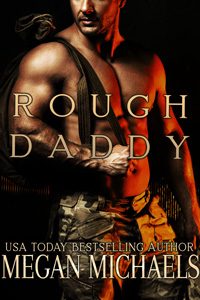 When eighteen-year-old runaway Marli Brown chose a dilapidated, seemingly vacant bar to spend the night, she didn’t expect to be caught, and she definitely didn’t anticipate being scolded, stripped, and spanked by the stern, handsome Green Beret who just bought the place. But her arousal is dripping onto her thighs long before the last stroke of his belt lands on her quivering bare bottom, and soon she is bent over the counter being claimed so roughly she knows she’ll be sore for days.

Finally home from his last deployment, Knox Chambers was planning to settle down and start a business, not tame a feisty, sharp-tongued teenager. Though it doesn’t take long for him to decide that Marli needs a daddy, he’s not going to be gentle. She’ll earn her keep helping him fix up the bar and the next time she swears at him she’ll be taught a better use for her sassy mouth.

Marli never imagined anything could feel so utterly shameful yet so wonderfully pleasurable, but with each painful, humiliating reminder of what happens to bad little girls her lust for Knox only grows stronger, and every blushing climax leaves her wanting even more. But when she is threatened by men seeking to get to him, will her daddy do whatever is necessary to protect her?

She pivoted, and her red-striped, pert ass came into view, the upper part of her bottom covered and the very spanked and sore plump cheeks peeping below the white garment had his cock lurching at the sight.

“Fuck, I wish we had time. I want to fuck you so bad.” He stared at her plump, freshly switched ass, his finger tracing the welted lines left by the twigs and said Fuck it.

He undid his pants, releasing his cock. Tugging her panties aside, he plunged into her depth, pushing himself to the hilt with one thrust.

Marli grunted and then tucked her ass when his hairy thighs brushed along her tender backside and thighs.

Gripping each hip with a hand, easily holding steady, he pistoned himself into her. “This is about me, not you. You’ll get your release later, I need to fuck you senseless and fill you with my seed. You’ll be Daddy’s fuck toy.”

“I’m…” Her body thrust forward recklessly with his harsh pounding. It was rougher than he’d ever been with her before. But the very sight of her switched ass, his marks, the evidence of his authority across her dimpled flesh…

Marking her. Claiming her. Making her his.

He was beside himself and just wanted to fuck her brutally hard and fast.

This wasn’t about making love, this was about claiming and taking what was his. This was about his seed seeping into her panties for the rest of the day. A constant reminder of his claiming.

She would feel his marks all day. Aching. Burning. Her cunt sore and dripping with their fucking. And then at the end of the day, he would brutally fuck her—again.

“Scream it.” He slapped her hip, thrusting his cock to the hilt, pounding ruthlessly into her. “Say it, girl.”

2018-11-16
Chris
Previous: Her Cowboy, Her Daddy by Shanna Handel
Next: Her Celtic Masters by Ashe Barker