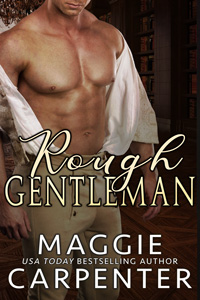 He took her in like a gentleman, but when he claims her it won’t be gentle.

Malcolm Mead isn’t the kind of man who would leave a woman out in the cold, and when a young lady dressed in little more than rags is accused of theft by one of his neighbors he decides to offer the beautiful, bedraggled girl a place to stay. But when his guest attempts to steal from him, Malcolm does not hesitate to bare her bottom and chastise her sternly and shamefully.

As he seeks to tame the wayward girl he has taken in, Malcolm cannot help noticing her body’s helpless response to his strict correction, and soon she is quivering with need as he shows her how intensely pleasurable it can be to surrender herself completely to his bold, skillful dominance. But his reluctant ward has a secret, one that could put both their lives at great risk…

“Place yourself on your hands and knees.”

“I just gave you an instruction,” he said sternly, pinching her thigh.

As she rolled on her stomach and rose up on all fours, he pushed her legs apart, kneeled between them, and wrapped his fingers around his stiffened cock. Feasting his eyes on her full, plump cheeks, he stroked himself for a moment, then placed his member between her thighs, tantalizingly close to her entrance. He heard her gasp.

“Fear not, sweet Connie. I won’t enter you.”

“I know,” came her whimpered reply. “More’s the pity.”

“Squeeze your legs together.”

As her luscious inner thighs closed against him, he grabbed her hips and began thrusting, her soaked pussy coating him as he pumped. Increasing his speed, he released one of her hips to smooth his hand over her beautiful backside.

“Much too pale,” he muttered, landing a solid swat.

“I hope that wasn’t a complaint,” he said gruffly, landing another on the opposite globe.

“Your bottom will be as red as I wish,” he added sternly, delivering more hot slaps as he continued to vigorously pump against her womanhood.

He wanted her to enjoy another climax, and with every thrust his rigid rod brushed against her clit, but he was nearing his release. Her gasps and moans told him her arousal was growing, but lagged behind his. She needed a boost—a thrill—something to push her over the edge.

“You’re going to climax, Connie,” he declared, slipping his thumb between the cleft of her cheeks and touching her rosebud.

Issuing the command, he sent his thumb into her dark, forbidden hole. Her shocked shriek echoed through the room, but a moment later she let out a wild, euphoric cry. Writhing violently, she bucked back against him, sending his thumb deeper into her prohibited passage.

His orgasm seized him, his essence spewed between her thighs, and his deep groans filled the room. Crackling sensations shot through his limbs, then abruptly waned. But her feral gyrations continued unabated until he carefully pulled his thumb from the decadent portal, and with a soft moan, she dropped on her stomach.

Collapsing beside her, he brought her into his arms. Still catching his breath, he listened to her soft sighs, then closing his eyes he joined her to drift in the serenity of their post-orgasmic bliss.

2019-11-17
Chris
Previous: Held as His Pet by Vonna Harper
Next: Harsh Daddy by Megan Michaels