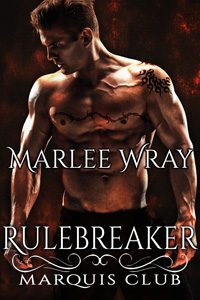 The rules said he couldn’t have her, but rules are made to be broken.

The moment he spotted Kate at the Marquis Club, Rory knew she would be his. The club’s rules demand that he wait until she’s trained, but he’s used to taking what he wants, when he wants it.

She’s only nineteen, but he’s not going to take things slow and he’s not going to be gentle. He’ll give her exactly what she needs, pushing her to the edge of what she can handle until she writhes and begs and cries out with both pain and pleasure. She’ll be spanked until she’s sobbing and then claimed so roughly she’ll still be sore when he takes her even harder the next day.

Kate has never felt so thoroughly dominated. Rory is fierce and forceful and being with him is far more intense than anything she’s ever experienced. But can he be the man she needs all the time, not just the master who brings her to one savage, screaming climax after another?

The spanking was long and much, much more thorough than any she’d had before. She had to squeeze her eyes closed to keep from crying.

When he sank his teeth into her scalding ass, she couldn’t keep herself from screaming and kicking her feet. The bite hadn’t been hard, but it was so intense when every nerve was on fire. He pushed her onto her side and crawled on the bed behind her.

“We’re not done,” he said, his tone a mix of threat and promise. He put his hand between her legs, while pushing his pelvis against her punished ass. “Need a rest? Or something else?”

“Something else,” she said through her tears.

His fingers slid into her, where she was soaked and aching for him. He pressed his palm against her clit and rubbed. It was such a rush after the pain and the spirals of adrenaline.

“My cock wants inside you. I want to nail you to the bed.”

She shuddered, desperate for that. She pushed back against him, even though her ass was so sore. She wanted him to claim her in every way. The way he’d dominated and punished her, nothing had ever felt so good, not in her darkest, dirtiest fantasies. He was real. And he was in control of what happened to her. He could do anything he wanted, and he was.

An orgasm rocked her world. It was hard to catch her breath.

“You can come on my fingers that fast? You’re not all sweet little kitten, are you?”

She sniffed and shook her head.

“You want me to drag you into a dark alley?” he murmured, still stroking her. “And force you down to your hands and knees?”

She groaned, pushing back against his hard body. “Please,” she rasped, unable to stop herself.

He tangled his fingers in her hair and pulled her head back. He kissed her, biting her lip at the end till she whimpered.

“Yeah, I feel you grinding against me.”

She reached back for his cock, but he pulled her hand away and pinned it against her lower back. That made her arch and ache harder for him.

“You know better. Seems like you can’t control yourself. Am I gonna have to tie you down?”

“Maybe,” she whispered, her heart hammering. She was scared and excited and a million other things at once. The only thing she knew was that she couldn’t bear for him to stop being the way he was. Not yet.

2018-09-01
Chris
Previous: Owned by the Highlanders by Lily Harlem
Next: Bought: A Dark Billionaire Romance by Loki Renard