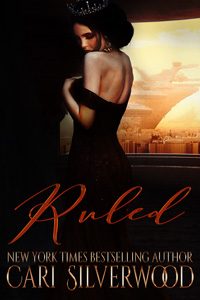 He’ll put this princess where she belongs. On her knees.

Calli’s father was king of this city. Drake has taken it now, and soon the little human princess will kneel at his feet and surrender not only her throne but her beautiful virgin body as well.

Though she does her best to hide her helpless arousal as the huge, battle-hardened beast tears her clothing to shreds and then spanks her soundly for daring to defy him, it isn’t long before Calli’s need has grown so intense that she can only beg for Drake to ravage her hard and thoroughly.

She will reign at his side, yet as Drake fits her with the leash and collar she is to wear as he claims her publicly as his mate, Calli is left in no doubt that she will be well and truly ruled.

The mere presence of this mauleon male seemed to thicken the air, to steam it with a heaviness that promised hard, relentless sex that would leave her hurting.

Her pussy ached from what he’d done last time. A nice ache. Her eyelids drooped as she remembered being made love to on his table. Or fucked as he’d call it.

Fucked made it sound filthier.

Slowly he advanced, swaggering, fully clothed in his battle-soiled clothes. His gaze molested her.

“I love how you obey me.” Drake was a step away from touching her. Her next breaths were dragged through parted lips.

She had obeyed. That irked her and Calli wrinkled her nose. If she had it, this torm was rendering her brainless, but who wouldn’t find him sexy, irresistible, and scary? She wriggled against the wall, hypnotized by this mountainous hunk of mauleon.

His clothes were dark hued. The ashes showed mostly on the muscles of his arms, and on his face. He’d left a pile of weapons and holsters on her bedroom floor.

Something made her dare to murmur, “Are you going to eat me, this time?”

He catalogued her from feet to upper legs, to her pussy and the triangle of her sex, where her beauty servant had left a thin wedge of hair. His gaze loitered there.

The heat rose in her.

“I’ll bury myself balls deep this time. I’m going to make you scream as you come.”

“Oh.” Her tongue poked the roof of her mouth. Gods above.

He shucked off his shirt, tossed it, muscles rippled and shone.

His pants and underwear came off next, were also tossed. Her eyes refused to do more than stare. His cock was pointing at the ceiling and looked far too thick and long for him to be able to… to get it all inside her.

“Fuck,” she choked out, her throat catching. “Stars above… No.”

“No?” He barked a laugh, grinned. “Liar. No more lying. Turn. I want to see how red I marked your ass.” When she faced the wall, he moved in and spoke quietly. “And I want to see your other hole so I can decide when to fuck it.”

“Going to happen. You’re going to do it because you want to, my filthy little princess.”

How could he make her want that?

“Don’t move.” Drake turned on the tap. The square showerhead above cascaded warm water over them both, flooding over her head, down her body, and over her feet. The roar muffled other sounds, made this feel less real.

This wasn’t her, shivering, with goosebumps all down her arms despite the warmth, waiting for him to take her.

He gripped her ass, fingers angling into her slit, then bit her nape. She arched back into him and felt one of his fingers push at her other hole. No. No. But she didn’t say it, too wrapped up in the mix of sensations, of bite and hand on ass, of the shame of what he did, of having this huge creature aiming to fuck her properly.