Rules of the Pack by Adaline Raine 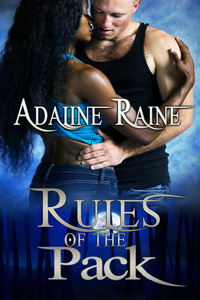 Alisha Knight is a down-to-earth woman who just so happens to have her sights set on the beta of a large werewolf pack. But despite the way her body reacts to his powerful presence, bitter experience has shown her that a wolf pack is no place for a human girl.

As his alpha’s trusted second-in-command, Phil McKenna takes his responsibilities seriously, even when that means taking disobedient females over his knee for an attitude adjustment. Though he is smitten with Alisha, the feisty little human friend of his alpha’s mate, humans and wolves don’t usually mix well and her presence could easily put both her and the pack in danger.

Yet try as he might, Phil can’t keep his hands off Alisha. His fearsome urge to mark her, claim her, and dominate her completely is only increased when her defiant attitude earns her a hard, bare-bottom spanking. But when the pack is attacked by a cunning, vicious enemy and Alisha’s life is put in grave peril, Phil must decide if he is ready to cast aside caution and take her as his mate.

“Okay. Let’s go upstairs.” Phil stood and motioned for her to walk in front of him.

She did as she was told, now appearing even more anxious than before as she quickly made her way up the stairs without a word. She hadn’t been in his room before, and he’d never allowed many women in.

Phil opened the door and gestured for her to enter. She did so and stood awkwardly in the center. Alisha didn’t seem to know what to do with herself so he quickly shut the door. There were a few ways he could punish her, but he wasn’t completely sure which was the best way to get through to her.

Each woman he disciplined had her own unique needs and reasons for needing the correction, and he had yet to figure out Alisha’s. He thought over his options, then sat on the edge of his bed. “Take off your jeans and get over my lap.”

Alisha blushed, but nodded and hurried to pull down her pants. She unbuttoned them, then slid them over her hips and legs until she could step out. He raised an eyebrow as her dark red panties came into view, and he wondered if she’d chosen them for this scenario. She hesitated a moment when she saw him staring, and then she took several hurried steps to the bed to clamber over his knees.

Phil admired her perky little bottom presented to him in the silky panties. He took his time grasping the waistband and slowly edging it downwards until it decorated her knees.

She took in a sharp breath, as if preparing herself for his hand. She really meant to take a spanking, he realized. There was something about her which attracted him immediately and now with her draped over his thighs, he knew it had been her desire to give up a tiny bit of control. He didn’t know her story yet, but her begging Mason to let her come over seemed like more than just lust.

“I, uh, really didn’t think I would see you anytime soon. You kind of threw me off base by coming to the—ouch!” She bucked as the first smack landed on her right cheek.

Before she could continue her thought, he let his hand fall swiftly against the other side. He brought his hand up quickly, more so for effect than for actually smacking her butt, and then brought it down again with a resounding slap.

2015-06-05
+admin
Previous: Buying His Mate by Emily Tilton
Next: Balancing the Baby by Stardawn Cabot