Rules of the Pack Hunts Down Two Top 100 Spots 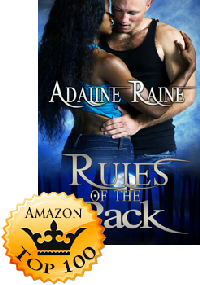 Phil is the beta enforcer of a werewolf pack. He takes his job very seriously, handing out punishments when someone shows him or another ranking member disrespect or puts themselves or the pack in danger. Alisha is a human, but grew up knowing about werewolves her entire life. When she meets Phil, she knows that he’s the man for her. The only problem is, Phil’s not convinced that she would be a good mate for him because how do you have a human woman as a mate in a werewolf pack that is surrounded by danger?

This was a really great story. As I was reading, I thought I knew what was going to happen next and then a twist would happen, changing up the entire story.

I loved the tension between Phil and Alisha. They both clearly liked each other, but due to their pasts they both tried to fight their attraction for one another. Phil wanted to keep Alisha safe and Alisha also knew that being a human in a werewolf pack maybe wasn’t the smartest idea. As the old saying going, ‘the heart wants what it wants’. These two hearts wanted each other and when they finally got together, it was explosive.

Very well done Ms. Raine. I can’t see what couple you write next for this series…maybe Cal and Portia…please. 🙂

I loved book one and I was so happy to see Phil get his story! This book picks up right where book one left off but stands alone. It was a delight to visit with everyone from ‘Marked by the Alpha’. The plot offers danger, suspense, Hot alpha werewolves, and some steamy romance. Read it in one sitting and loved every minute of it.