Rules of the Wild by Jaye Elise and Jack Crosby 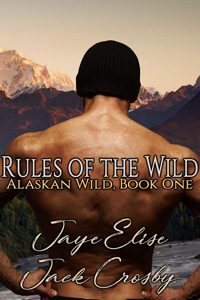 After her father’s gambling addiction finally catches up with him and his debts put her life in danger as well, Emy Forester is forced to go into hiding in Juneau, Alaska. Planning to start a new life, she finds a job at a local pub, and it is there that she first sets eyes on Tobias Wyatt.

Tobias is unlike any man Emy has ever met. The former game warden is as rugged, harsh, and uncompromising as the Alaskan wilderness he calls home. He is the kind of man a woman obeys unless she wants to feel his belt across her bare backside. The thought of belonging to Tobias should terrify her, but instead it leaves Emy’s heart racing and her panties soaked.

When Emy lets her curiosity get the better of her and flirts with Tobias one time too many, she ends up spanked until she is sobbing. Despite her blushing cheeks and sore bottom, however, his rough, dominant lovemaking proves more satisfying than she would have thought possible, and an intense, passionate romance quickly ignites between them.

Over the coming weeks, Tobias sets out to teach Emy the proper respect for the dangers of this wild, untamed land. But the men who killed her father haven’t stopped looking for her. When Tobias learns that Emy has been lying to him about her identity, will it destroy the bond they’ve built together, or will he forgive her deception and take it upon himself to protect her?

Publisher’s Note: Rules of the Wild is a stand-alone novel which is the first book in the Alaskan Wild series. It includes spankings and sexual scenes. If such material offends you, please don’t buy this book.

“Tell me, why are you getting a spanking, young lady?”

“I-I broke the rules, sir,” she whimpered, more embarrassed by having to tell me what she’d done than by being ass-up over my lap.

“And how’d you break the rules?”

“I went outside without you. But I really had to—”

“Hush now.” She’d gotten dressed to go outside, so I slipped my hand beneath her to get her fly undone, then pulled her jeans and her panties down. Her exposed ass, creamy white and inviting, was sticking up at me.

“I gave you a rule—no going outside without me—and yes, you broke it,” I agreed. My meaty hand came down hard across the cleft of her ass without giving her the benefit of a warm-up.

“You could’ve died,” I told her as I struck the area again. The formerly pale skin of her taut cheeks began to blossom pink.

Was it anger or disappointment I felt at her behavior? It was a confusing muddle of both. With those mixed emotions, I whacked her bum again and again, hoping the lesson was being learned as she squirmed under my grip.

There was another problem, though. As she twisted across my lap and I spanked her for her disobedience, a feeling—a deep-seated longing—settled in. As the front of my jeans grew uncomfortably tight, I kept my face level, hoping Emy didn’t feel the bulge as it grew closer to her stomach.

The spanking wasn’t finished yet. Her ass was nice and pink, from the fleshiest crest of her globes down to the join of her thighs, but for a lesson to be learned, she needed to be burning red. Again, my callused hand came down and met her soft skin, adding more color to what I’d already given her. Her plaintive whimpers and the deep scarlet blush I’d raised let me know we were close to the end.

“You understand why I’m doing this?” I asked solemnly.

“I broke a rule,” she moaned through gritted teeth.

“Not just a rule,” I reminded her. “The most important rule. My wife died and she respected the wilderness. You don’t yet.”

She sobbed a bit and I gave her one final whack. This time, it was hard enough to leave a solid imprint of my hand against her skin, and it brought our session to a finish. The heat rolled off Emy’s supple ass, intense yet pure, and I let her reach back and rub her sore cheeks. I lifted myself up, bringing her with me.

As her feet touched the floor, I pulled her to my chest and kissed the crown of her glowing red hair. She mumbled a quick I’m sorry into the bulk of my chest, wiping her face on the flannel to dry her tears.

2018-01-14
Chris
Previous: Big Daddy by Ava Sinclair
Next: In Need of a Master by Emily Tilton