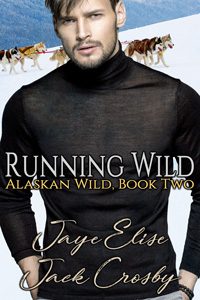 When former Olympian Jordyn Maxwell is selected to participate in the most grueling sled dog race in Alaska, a six-hundred-mile ordeal that puts even the most experienced mushers to the test, she is determined to prove herself and bring home the top prize. But the competition will be fierce.

Though she expected the long, difficult journey across the frozen wilderness to be a lonely affair, Jordyn quickly forms a bond with handsome fellow racer Rudolf Wyatt. But when she puts her safety at risk with her reckless behavior, Jordyn is shocked by Wyatt’s willingness to take her over his knee for a humiliating spanking on her bare bottom, and as the race continues she finds herself with blushing cheeks and a burning backside on several more occasions.

Wyatt’s bold dominance and stern correction leave Jordyn intensely aroused, and when he takes her in his arms and claims her hard and thoroughly it is unlike anything she has experienced before. But will their passion survive the trials of this harsh land and the scheming of someone who seems intent on keeping either of them from crossing the finish line alive?

Publisher’s Note: Running Wild is a stand-alone book which is the second entry in the Alaskan Wild series. It includes spankings and sexual scenes. If such material offends you, please don’t buy this book.

“And you remember what I told you before you left this morning?”

“Yes, sir,” I mumbled, shifting from side to side.

“You said no panties this time.”

“That I did. And judging by the look on your face at the time, you seemed pretty excited about that, hm?” He raised his eyebrow and considered me, analyzing each twitch of my face and syllable I uttered.

“Shh. Stop thinking so much.” He pulled me against him, neither of our hard bodies yielding yet finding a position where I was able to curl against him perfectly.

“You don’t have to defend yourself to me or anybody else.” He let out a sigh and kissed the top of my head. “But you like being taken in hand, don’t you?”

How he’d figured out my dark secret in less than twenty-four hours, I would never know. I nodded against him.

“And you’re ready to take your punishment now?”

I looked up at him and gave him another nod and a plaintive yes, sir.

“That’s my good girl. Now, let’s get you out of those panties and onto the bed, face down, ass up.” He encouraged me to hold up the bottom of his shirt, revealing a pair of black lace boy shorts. They weren’t practical for the trail, but every once in a while I liked to feel sexy. This was one of those times.

He tucked his thumbs into the waistband and slipped them over my hips, dropping them to the floor between us. With a hand against my lower back, he guided me to the bed and pushed the shirt up toward my neck, leaving my cheeks exposed and chilled in the cool room. Goosebumps erupted across my backside, more likely due to his callused, trained fingers trailing their way up and down the cleft of my bottom and toward my wetness rather than the temperature in the room.

“You did well yesterday, and I don’t want to push you too hard, but this still needs to be a punishment. Discipline ain’t fun, Jordyn. Don’t forget that.”

“No, sir,” I murmured into the comforter.

“I’m gonna start with my hand and then move to four with the belt.”

The mention of his belt had me shivering down to my core. Although I’d been spanked plenty in my day, I’d never felt the kiss of a leather belt. I was surprised at how aroused I was at the prospect, as a trickle of my essence slid down my inner thigh and my puffy labia ached with need.

When his hand connected with my sore rear, I had to bite off a whimper. Yet after about a dozen or so warm-up swats—carried out in a measured, precise cadence that didn’t seem to fit this wild man—I gave myself over to the experience and let the eroticism of the moment flow through me. The pop of his palm. The sting of the aftermath. The burning glow in anticipation of the next. The desire to submit to his punishment and care.