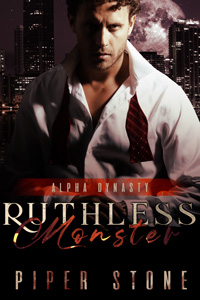 I may be a monster, but she will still be mine.

When Esme Rawlings looks at me, she sees many things. A ruthless mob boss. A key witness to the latest murder in an ongoing turf war. A guardian angel who saved her from a hitman’s bullet.

But when I look at her, I see just one thing.

She can investigate me as thoroughly as she feels necessary, prying into every aspect of my family’s vast mafia empire, but the only truth she really needs to know about me she will learn tonight with her bare bottom burning and her protests drowned out by her screams of climax.

I take what belongs to me.

Publisher’s Note: Ruthless Monster is a stand-alone novel which is the third entry in the Alpha Dynasty series. It includes spankings and rough, intense sexual scenes. If such material offends you, please don’t buy this book.

“Open your legs for me,” he instructed, his husky voice sending another wave of shivers dancing down to my toes.

While I obeyed him, it was obviously not enough. He pressed his hand on the inside of one thigh, pushing them open as far as possible. Then he stepped further away.

Just hearing the whooshing sound the strap made slicing through the air was enough to make me nauseous. I held my breath, my body jerking involuntarily from the hard strike. There was no pain, at least at first, only a series of tingles.

But when he slapped the belt across my bottom a second, third, and fourth time, stars exploded in front of my eyes, the pain excruciating.

“Fuck. Oh. Oh.” I hated the sound of my whimpers as well as the way my body jerked, my legs kicking out. I heard his exasperated sigh and forced my legs back in position, already praying the man wouldn’t start over.

“I’ll give you one additional warning to stay in position. There won’t be a second. Do you understand?”

Why did I have the feeling he wanted me to call him ‘sir’? That definitely wasn’t going to happen. “Yes.”

Now the fucker was being condescending.

I gritted my teeth when he smacked me at least six times in rapid succession. I’d even managed to hold my breath until the last one. The pain had turned into utter anguish, curling my toes. “Oh. God!” I had a feeling my scream could be heard at least a mile away. Two had landed on my upper thighs. I was certain I wouldn’t be able to sit for a week.

“You’re doing very well,” he stated then dared to caress my bruised, heated, and sensitive skin. And damn if it didn’t feel good. Too good. “I’m going down the center for four.”

The center. What was he talking about?

As soon as he brought the strap down between my legs, hitting the crack of my ass, it was all I could do not to jerk off the table, racing away from him. Nothing could be any more painful. Nothing.

A growl erupted from his throat as he cracked the belt, his aim perfect. When he pulled my ass cheeks apart, rubbing the inside portion with a single finger, I gasped for air, the sound strangled.

“Your skin is very hot, which is good. I think this will be the perfect reminder that you’ll need.”

I closed my eyes, trying to concentrate on the terrible sounds, forced to take shallow breaths as my throat started to close. After he’d returned to the normal position, if there was such a thing, I almost breathed a sigh of relief until he delivered eight, one coming after the other. There was no way to stop the few tears from slipping past my lashes.

But as he continued, the pain shifted into a crazy series of vibrations, every inch of skin on fire, not just my bruised bottom. My pussy clenched and released in time with the brutal smacks. I was so wet that I knew juice had to be trickling down against the table. Panting, I scratched the table, confused as to why I was so damn aroused. How was that possible?

Finally, it was all over.

Or so I thought.

The bastard moved behind me, running both his hands down my spine. Then I heard his zipper being yanked, the rustle of his trousers. The man was going to fuck me.

And I wanted him to.

When he gripped both hips, yanking my torso off the edge, he issued a gritty statement, one that kept the electricity surging through me. “Good girls get the pleasure of being fucked in their pussy. Bad girls only get fucked in the ass.”

2022-03-05
Chris
Previous: Sold by the Alien: A Rough Sci-Fi Romance by Loki Renard
Next: Claiming Clementine: A Steamy Western Romance by Maggie Carpenter