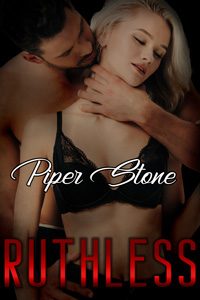 When he decided he wanted me, he took me.

Treating a mobster shot by a rival’s goons isn’t really my forte, but when a man is powerful enough to have a whole wing of a hospital cleared out for his protection, you do as you’re told.

To make matters worse, this isn’t first time I’ve met Giovanni Calduchi. It turns out my newest patient is the stern, sexy brute who all but dragged me back to his hotel room a couple of nights ago so he could use my body as he pleased, then showed up at my house the next day, stripped me bare, and spanked me until I was begging him to take me even more roughly and shamefully.

Now, with his enemies likely to be coming after me in order to get to him, all I can do is hope he’s as good at keeping me safe as he is at keeping me blushing, sore, and thoroughly satisfied.

Publisher’s Note: Ruthless is a stand-alone sequel to Caught. It includes spankings and sexual scenes. If such material offends you, please don’t buy this book.

“I’m going to teach you how to obey.” Gio’s husky voice floated over me, creating another wave of raging desire.

I was thrown into an odd state, anguish yet bliss, fury yet ecstasy. I could feel my pussy juice trickling down both thighs and all I could think about was whether I’d stained his expensive pants. Closing my eyes, I almost had no fight left in me, the pain overwhelming.

With every hard smack, I fell deeper into a lull, my head lowered and tears slipping from my eyes. The sadness had nothing to do with the pain, only remorse and embarrassment. “Please. Stop!”

He hesitated, pressing his hand on the small of my back. “You have no idea what you do to me, the hunger that refuses to be denied.”

I had no comeback, but I knew exactly what I was doing to him, the throbbing of his thick and delicious cock hitting my belly. I was ready to devour him with my mouth, sucking every drop of seed. I was ready to spread my legs wide open, begging him to lick and eat me. I wasn’t the same woman. This wasn’t the girl who was respectable and ready for a real relationship.

I simply wanted to be fucked.

The blistering sensations continued, and I groaned every time his hand came down. He seemed methodical, taking his time as if practiced at what he was doing. When it was over, I heard his soothing voice telling me that I’d been a good little girl. What? I was a woman and I wasn’t going to tolerate this and… My thoughts were muddled as he took me into his arms long enough to brush the hair from my eyes.

Training? I knew I hadn’t muttered the word but the look in his eyes was primal, more like a carnivore than a man. “I don’t understand.”

“You will when I’m finished with you.” He pushed me off his lap, leaning back against the couch and placing his arms on the back. “Remove your clothes.”

“You heard exactly what I said to you. If I have to repeat myself, trust me, I will remove my belt and give you a spanking that you’ll never forget.”

There was a huge portion of me that wanted to race into the kitchen and grab the knife. No man had control of me and none ever would. Sadly, I was so turned on that I was shaking from the realization. Since I didn’t lash out, some wretched part of me must want this, his domination and his discipline. My shorts and panties had dropped to the floor and I stood like a little girl with my arms in front of me, hiding my nakedness.

Gio pursed his lips, giving me a nod. “Go ahead.” He reached behind his back, retrieving a gun and sliding it onto the coffee table. While I should be shocked, even mortified, I wasn’t. Whatever this man was involved in held that very aura of danger he so diligently wanted me to buy into. He lifted a single eyebrow, as if expecting a nasty retort to his action.

There was nothing I could say.

I swallowed twice before kicking out of my shorts and panties, my entire body shaking as I attempted to pull the simple tee shirt over my head. I closed my eyes when I tossed the material somewhere, shivering to the point my teeth were chattering.

“Good girl. You can learn.”

“Don’t talk like that to me.” The pain flashed in my body before I realized that he’d leaned forward, pinching and twisting my nipples, forcing me to yelp.

“Why…” My mouth twisted, both revolted from and relishing in the anguish rushing through every cell in my body. I was absolutely electrified, sensations that I’d never experienced flowing through my muscles and going all the way to the bone.

“Down on your knees.”

He used my nipples as leverage, pulling me until I finally dropped in front of him. “What do you want?” I asked between clenched teeth. I was free floating, living yet another fantasy and I couldn’t stop myself.

“Everything. You should know that by now and I always get exactly what I want.”