Safe in His Arms by Renee Rose 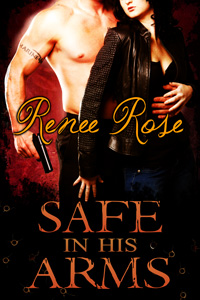 For as long as she could remember, Becca dreamed of a dominant man to take her in hand, and Zac, the handsome Marine she met at her sister’s wedding, filled the role with aplomb… for a weekend. Then the fling came to an end, Zac went off to war and died for his country, and Becca learned she carried a child who would be born without a father.

Seven years later, Becca has done her best to move on and forget about Zac… until the day she walks into her kitchen to find the man she believed she would never see again locked in mortal combat with her son’s nanny, and realizes everything she thought she knew about Zac was a lie.

Like all Black Ops agents, Zac doesn’t exist in any government record. His life is a series of deadly missions, and relationships of any kind are unsanctioned. But he keeps one secret. He watches over Becca, the beautiful daughter of a rogue agent, and Parker, the six-year-old boy he fathered that fateful weekend. When he spots a known assassin in their apartment posing as a nanny, he’s forced to reveal himself and take them to safety… whether Becca likes it or not.

While Becca may have enjoyed his dominance once, bending her to his will again may not be quite so easy. He is determined to keep her safe, however, and if a long, hard spanking is required, he is more than willing to oblige. Having Becca over his knee rekindles more than his passion, though; even when the immediate danger has passed, he finds it much more difficult to “ghost out” on his family again. Must he resign himself to protecting those he loves from afar, or can he find a way to be the man Becca needs and longs for, the man who is worthy of her submission and her love?

She leaned her full weight against him and he relished the offering. “Are you still going to spank me?” she quavered.

She nodded into his chest.

“Take off your clothes and stand in the corner.”

She pulled away and looked up at him, her lips parted in surprise. He gave her a challenging look and watched her turn resolute. She pulled off her t-shirt and skirt and walked to the corner in her bra and underwear. There, facing the wall, she slowly removed them, too. Her breath was short and labored. He went to the bathroom to pick up the phone parts and stow them on the ledge above the door frame. He strapped on his Glock 27, never forgetting his real reason for being there.

Removing the plastic rod from the drapes, he tossed it on the bed before retrieving her inhaler. Reaching around behind her, he pressed it to her mouth and delivered a dose. When her breath had slowed, he asked, “Are you scared of me, Becca?” He held her shoulders, his lips close to her ear.

He kissed her ear. “Good. Go and bend over the side of the bed.”

She sucked in her breath and obeyed him, her chin lowered, her forearms covering her breasts as she walked. She bent over and presented her delicious posterior for punishment. Confident this time, he ran his hand over her still-pink flesh, feeling the baby-softness of her skin, the shape of her muscular curves.

“I’m going to spank you long and hard, Becca,” he said. “And I’m going to spank you to tears, so don’t hold back on me. There’s no safe-wording out of it this time—the spanking will be over when I decide it’s over, and only when I decide. I will make sure you’ve learned your lesson.” Then he added a little neuro-linguistic programming, “Your lungs will stay open and you will be able to breathe normally.”

She lifted her head, craning it around to try to see his face. He gave her butt a slap. “Yes, Becca. Your lungs can obey me, too. Just believe it, and it will be true.”

He started to spank with his hand again, and this time she held still for him, making little cries and jumping, but not fighting him. She curled her fingers into the bedspread and hid her face. He spanked steadily for a long time, giving her a thorough warm-up to prevent bruising. He liked the way she twisted and dodged, kicked up her legs in a natural response to the pain, despite the fact it was something she simultaneously craved. He stopped and rubbed her bottom, murmuring, “Good girl, Becca. You’re doing well.”

2013-07-27
+admin
Previous: His Naughty Bride by Chula Stone
Next: Claiming Their Maiden by Sue Lyndon