Safe in His Hands by Shelly Douglas 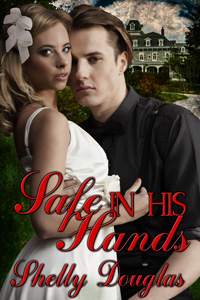 Though they have known each other since high school, Libby Diamond still cannot bring herself to tell her boyfriend, firefighter James Walker, about the yearning she has long felt for guidance, structure, and discipline in her life. It comes as quite a shock for Libby when she learns that not only has James known about her needs all along, he is also more than ready to give her what she seeks. Soon she is standing in the corner like a naughty little girl before being taken over his knee for a hard, bare-bottom spanking to remind her not to keep things from him.

Cindy Lewis has been hoping for years that one day the right man would come along for her—a firm daddy who would watch over her, hold her accountable for her actions, and sometimes even make her blush while he teaches her to be a good little girl.

When strange and alarming things start happening in her home, Cindy calls her best friend Libby for help. With her boyfriend still at work, Libby brings their old high school friend David Clark along to Cindy’s house, and David and Cindy quickly hit it off.

It isn’t long before Cindy is being bathed, cuddled, and spanked by her new daddy, but even as their romance blossoms, mysterious, disturbing events at Cindy’s home continue to terrify her. Can David protect his little girl from whoever or whatever is lurking in the shadows?

“Bare your bottom and lower yourself over my knee right now,” he uttered in a dark, quiet voice.

Libby complied and he repositioned her so that the upper half of her body was on the bed. His left knee kept her bottom high in the air, while his right leg secured her in place. She wondered how he’d learned how to do that.

His fingers were splayed on her naked behind as he began with the million-dollar question. “Why are you getting this spanking, Libby?” His voice was deep as he began to rub her bare bottom.

She knew she should answer quickly, but didn’t. After a swift smack landed directly in the middle of her smooth, ivory cheeks, she decided to speak. “Because I lied to you and it won’t happen again.”

She turned to look at him through narrowed eyes. “Ouch! That hurt. Was that your hand?”

“It’s supposed to hurt. Face forward, Libby, and behave yourself.” He applied his open palm hard and slow several more times in the same spot until she could feel the heat forming.

He stopped and kept his hand on her hot bottom as she remained in that embarrassing position. “I’m guessing that didn’t hurt in your fantasies.”

She could hear the smile in his voice as she shook her head.

“Promise you won’t lie to me anymore.”

“I promise.” She should’ve been honest with him from the start. Her eyes filled with tears as he tenderly patted her bright pink behind and told her she was forgiven. Then he pulled her up into in his arms and rocked her like a baby, repeatedly kissing her wet cheeks.

2015-07-25
+admin
Previous: Claiming Crystal by Melody Parks
Next: Visits to the Headmistress by Jane Fairweather