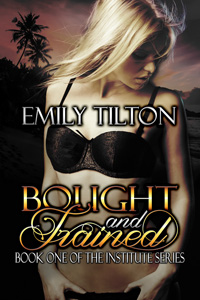 What price would we not pay to feel, at last, that we could live our true selves? Rose certainly didn’t know the answer to that question as she signed the contract.

A million dollars from the man who chose her, with the requirement that he pay a million more if she stayed with him for a year.

But the money wasn’t the reason. The reason was the fantasies.

“Alright, Rose,” said Leo Hastert, her case-agent (as he called himself) for the Institute’s concubine program, which was the only name this strange—what? company? system?—thing she was doing had. “I’m going to go over this one more time, as I’m required to by the Institute, OK?”

“After you leave here today, you will deposit a copy of this contract, along with any documentation you choose to add, in a safe-deposit box monitored by our program-agents, but kept at a public bank. Then you will return here, and you will be hypnotized by a skilled professional. Your memory of the program, and of signing this contract, will be deeply hidden. At some point, over the next few weeks, you will be abducted, and trained as a concubine in a secret location. During your abduction and training, your progress will be monitored by us and by your friend Joanne Goshen, who referred you to us, though you will not, of course, remember that she is monitoring you. If at any time we think, or Joanne thinks, you are being harmed in any way, or that your training is not resulting in the psychological well-being you were seeking when you came to us at her suggestion, we will intervene, and you will be returned, with your memories restored, to your existing life-situation, one million dollars richer.

“If, on the other hand, Joanne does not intervene, you will in due course be delivered to our client, who will have chosen you as his concubine. As Joanne continues to monitor, you will serve him as he sees fit, and he will treat you exactly as he pleases, according to the list of requirements we supplied.”

Rose felt her hands tremble slightly, as she remembered all the terrible things on the list of requirements, the punishments and the humiliations, but she nodded anyway.

“Again, if intervention is necessary, you will be returned, restored, and enriched. But if you remain with your master for a year, you will gain an additional million dollars, and another for each year of service.”

Leo looked at Rose for a long moment; then he said, “Are you prepared to sign?”

“I want to make sure, Joanne,” said Abigail Podret, the academic dean of the Institute, “that you understand why we have accepted Rose into the program.”

Now, on Joanne’s screen, Abigail continued, somehow looking lovely even over video chat, her black hair pulled back in a chignon and her porcelain skin luminous, “We accepted Rose because of the family issues.”

“Oh,” said Joanne, “you mean the way her parents were about the marriage?”

“Yes—they didn’t try to stop her from marrying her college boyfriend when it was clear she was only doing it because she didn’t know what else she should do. There’s no doubt at all that she’s a yearning sub—not that her parents could have known that, of course!” Abigail held up her left hand in a sort of ‘whoa’ gesture whose charming innocence made Joanne want to spank her silly, the way she had five years before in that hotel room.

“If her family background had given her more assertiveness about her inner life. Yes.”

“So what are you thinking the program will do for her?” Joanne asked, sure now that she had done the right thing in referring Rose.

“We think Rose needs to find a new kind of family—a decidedly non-traditional family that will nurture and support her submissive desires. Frankly, her new owner and his wife may not be the right match—not because there’s any reason to think it won’t work but simply because we won’t know until Rose serves him for a while—but having the experience of that family structure will, we think, give Rose the self-knowledge she desperately needs, in order to find in that family, or in some other family, a way to feel like she is living the way she’s supposed to live.”