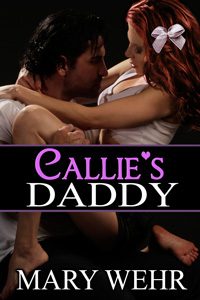 “Callie mine, I can’t spank that naughty little fanny of yours if you’re standing halfway across the room.”

Callie shifted nervously from one foot to the other, resisting the urge to cup her naked bottom with her hands and keep them there. “Um, well, that’s the whole idea, Daddy Brand. I don’t think I’m near ready for this spanking.”

“’Cause I know it’s gonna be a bad one.” She’d broken one of daddy’s rules way too many times even after she’d been warned of the consequences. “Can’t we put it off for another day?”

Brandon heaved a sigh and ran a hand through his black hair. “No, we can’t and stalling will only make it worse, princess.” He patted his thigh, coaxing her to come forward. “Come here and let’s get this over with.”

He was sitting on the edge of her bed shirtless, his trousers undone, hands resting on his knees. Callie allowed her gaze to pause a moment on his wide chest, admiring the fine dusting of hair that curled around his flat nipples then narrowed to a V and disappeared just above the waistband of his underwear. She could almost taste the saltiness of his skin. He cleared his throat, snapping her out of her lusty thoughts.

“Callie, be a good girl. Don’t make me come and get you.”

His tone remained stern, but his expression showed regret. Brandon Clay was her Prince Charming. Tall and handsome with broad shoulders and hands big enough to circle her waist and lift her high in the air just like her daddy used to do when she was a little girl. Callie bowed her head and closed the distance between them. She deserved this correction and she’d make him proud by being a big girl and accepting her punishment.

He spread his knees further and she stepped between them. The movement caused the flaps of his pants to open further and she couldn’t help but peek at the slight bulge tucked inside. She swallowed hard as he guided her over his lap. Her belly made direct contact with his firm hot flesh.

Fine by me. Callie wiggled in an effort to get comfortable. She so enjoyed daddy’s warm-ups. Kinda helped to relax her before the grand finale.

Caught off guard, she reached back to rub her punished cheek. “Yikes! Your idea of a warm-up is a hell of a lot different than mine.” She swore her right buttock had just burst into flames.

Brandon grabbed both of her wrists and pinned them behind her back. His forearm rested between her shoulder blades to keep her still “No rubbing.” The next smack landed on her left buttock in much the same fashion. “Shit!”

“Tsk, tsk, what did I tell you about swearing? We’d be at three, but now I must start over.”

Callie shoved a fist in her mouth in order to keep from yelling her head off. Seemingly satisfied, Brandon went for four. She cried out at the fifth. All in all, she received ten solid smacks, twelve if she didn’t add the first two. “Now, that wasn’t so bad, was it?”

Her bottom had to be a bright red and she’d be surprised if she could sit at the breakfast table tomorrow without a pillow on the chair and he made light of her plight? “Easy for you to say, I, oh, my…” His palm glided over each punished cheek, eliciting a moan from the back of her throat. With each pass, his hand drew closer toward the sensitive skin surrounding her dark hole. She bit her lip. Just the thought of him touching her in such an intimate way ignited her arousal. Callie spread her legs, panting as he pushed his little finger inside that forbidden place, just to the first knuckle. She bucked her hips. “More.”

“Such a dirty girl you are,” he chided, withdrawing his finger. “You don’t get rewarded for breaking the rules, princess.”

“Please, Daddy Brand, make me feel good.” She twisted and squirmed until her pussy connected with a certain spot on his anatomy that had swelled in size.

“Since you asked me so sweetly, how could I not?” He slid his middle finger inside her pussy and, at the same time pressed the tip of his thumb slightly into her back hole. His thumb was much bigger than his little finger and she gasped at the initial intrusion, squeezing her bottom cheeks so he couldn’t go any further. “Does this hurt, my sweet?”

Pleasure quickly replaced the burn, leaving her longing for more. He removed his thumb and she wiggled her bottom. “No, it feels good. More, please.” She raised her hips and eagerly met his thrusts. Her pulse quickened, her eyes widened, and she screamed from the force of her orgasm. Brandon pulled her into his arms and rocked her gently in his lap. “You’ll always be my special girl, princess.” He pressed a feather-light kiss on her forehead before laying her down on top of the covers. “I’ll be right back.”

Callie heard the sound of water running in the bathroom. Within minutes, he came back with a washcloth and wiped her gently between her legs. “There now, you’re all cleaned up. Let’s get you under the covers.”

Callie scrambled to do his bidding. He settled himself next to her and gathered her into his arms. She inhaled deeply. The fine hairs on his chest tickled her nose and she giggled.

“Silly.” Brandon arranged the blanket so that they were both covered. “At least the air conditioner works in this rundown place.” He bent his head. “You, my girl, need to finish your packing.”

Callie smiled, snuggling close. “I can’t wait to move in with you, Daddy Brand.” The steady beat of his heart echoed in her ear. She yawned. Wrapped in his arms, she fell asleep.