Claimed by the Captain by Gracie Malling – Sample 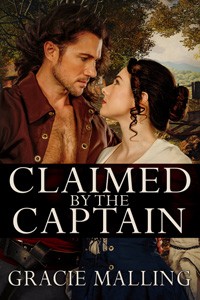 Ellen Makepeace stood by the edge of the grave and looked down.

Poor Mr. Edwards. She had tried every remedy and charm she knew but, in the end, there was no saving him. When your heart goes, that’s the end of it, nanny used to say. Mr. Edwards had been so kind to her after nanny died. Without him, Ellen would have been homeless and destitute within days of her grandmother’s death.

It was dark down in the grave but Ellen could just make out the paleness of the shroud and the little coloured patches that were the flowers she, Martha, and Mrs. Jameson had woven into the fabric back at the inn this morning.

“Come on,” hissed a voice behind her. “Everyone is leaving.”

Without looking, Ellen knew that it was Martha. She could picture the way her sallow face would be screwed up in disdain, wisps of pale blond hair falling in front of her eyes from under her white cap. Ellen had thought Martha rather beautiful when she first went to work at the White Hart Inn but now, after years of suffering her spite and cruelty, she could see only ugliness.

“Go then,” whispered Ellen, still staring down into the grave as though mesmerised. “Do what you like. I don’t care.”

Ellen heard Martha’s stomping footsteps as she hurried off to join the rest of the retreating mourners and the sound made her wince. It had been a dry summer and the ground in the churchyard was hard. What she needed now was peace: a quiet moment to say goodbye. The sounds of the other mourners’ footsteps and low voices were fading away. A brisk, warm breeze whispered through the graveyard, blowing strands of dark hair across Ellen’s face and rustling the skirt of her black mourning dress. A change is coming, nanny would say whenever the wind blew like that.

Pushing that thought out of her mind, Ellen reached into her apron and retrieved the charm she had made the night before: a sprig of rosemary and the head of a white rose tied together with black ribbon and left out in the moonlight. She whispered all her thank yous and her goodbyes into the charm, kissed it, and then let it fall down into the grave.

The moment it was done, she wanted to leave.

Although she was tempted to simply hold up her skirt and run out of the churchyard, Ellen forced herself to resist out of respect for Mr. Edwards, settling instead for a brisk walk. Before long, she had reached the small party heading back to the White Hart Inn.

“Oh, there you are,” said Mrs. Jameson as Ellen fell into step beside her.

Mrs. Jameson and her husband had been with Mr. Edwards ever since he took ownership of the inn, over thirty years ago. Her round face was red and swollen from crying. Without a word, Ellen laced her arm around Mrs. Jameson’s elbow and rested her head on her shoulder. They walked along together in silence. Aside from nanny, Mr. Edwards was the first person close to Ellen who had died. Her mother had died when she was a baby and she had never known her father. People died all the time, of course; she knew that. And although nanny had always said that there was no need for sorrow, that people simply returned to the earth and lived forever in the trees and the flowers, Ellen could not seem to hold back the sorrowful thoughts seeping through her mind. Silent, hot tears coursed down her cheeks.

The sound of hoof beats hurrying along the path behind them jolted Ellen out of her reflections. She turned and then muttered a curse under her breath when she saw who was bearing down on them.

It was mark of how overcome with grief Mrs. Jameson was that she did not scold Ellen for swearing. Instead she whispered, “Who is it?”

“Sir Henry,” replied Ellen, watching with narrowed eyes as the horse and rider passed them and then came to a halt on the path ahead, blocking their way.

Sir Henry Wraithbone owned most of the land in and around the village and, as such, was not the wisest choice of enemy. Ellen, however, had not allowed this to stop her.

“Mr. Jameson, Mrs. Jameson.” He gave them a nod. “Please accept my condolences for your loss. Miss Fletcher.” He nodded to Martha and then his gaze shifted to Ellen. Something akin to a smirk crossed his face. “And you, of course, Miss Makepeace.”

Mrs. Jameson gave a stiff curtsey. “We thank you, sir.”

“So difficult for you all, of course,” Sir Henry continued, leaning forward in his saddle, his greying blond hair shining almost white in the sunlight, “Now that your master is dead. Indeed, a most unsettling time.”

Ellen clenched her hands into fists. Sir Henry might speak of ‘condolences’ but she could feel the cruel delight coming off him in waves.

“I am sure that there is a way I could help you…” His gaze lingered on Ellen as he spoke.

Ellen could remain silent no longer. “As I have told you many times, sir, I have no need of your ‘help.’”

“Prefer vagrancy and starvation, would you?” demanded Sir Henry, his kindly façade dropping in an instant. “You may not be so proud one day, my girl, and then you may find yourself looking back on this moment with bitter regret.”

“I should much rather starve to death in the woods than spend a single moment in your bed, you old—”

Ellen jumped and fell silent at once. Mr. Jameson spoke so rarely that sometimes she forgot that he could.

“Begging your pardon, Sir Henry,” said Mr. Jameson in his gruff yet gentle voice. “Mr. Edwards’ son will be coming home to take charge of the inn. So we thank you for your kindness but we shall have no need of your assistance.”

“Nor your false sorrow,” muttered Ellen under her breath.

“His son?” barked Sir Henry. “You truly expect him to return from the sea after all these years to take ownership of a rundown old inn? I fear you will be waiting a long time.”

“Nay, sir, he is already on his way. He has sent word.” Mr. Jameson’s voice was mild but there was an underlying firmness to it.

Sir Henry made a sound of derision. “Men like that do not settle in places such as this. He will be gone again within the year, mark my words.”

“I thought he had been at sea for twenty years,” said Ellen, raising her voice despite Mrs. Jameson’s ever tightening grip on her arm.

“Yes, and?” asked Sir Henry, raising his eyebrows at her.

“So how would you know what kind of man he is?”

The smirk on Sir Henry’s face faded away to be replaced with something altogether uglier.

“Watch this girl, Mr. Jameson,” he said, as he turned his horse around, “she will go to the bad, mark my words. I bid you good day.”

Ellen watched him ride away, heart pounding. She hoped he was wrong about the new master. Surely Mr. Edwards’ son would not abandon them to the mercy of someone like Sir Henry?