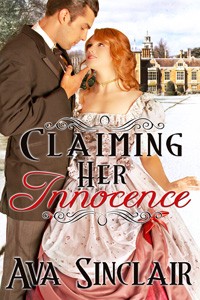 “Did you hear?” the plump redhead turned to whisper in the ear of the man behind her as he nibbled on the curve of her neck. “Lady Penelope arrived today.”

“Lord Westcott’s bride-to-be?” The man kneeling in front of her pulled his mouth from the nipple he was suckling and looked up, his hands roaming her ample curves as he asked the question.

“Are you saying ‘yes’ to me or to Davy’s question?” The tall, handsome man behind her laughed as he resumed his nibbling.

“Oh, Tom,” Betsy giggled as she pushed her bottom back against his hard cock. “You know I say ‘yes’ to everything, especially this time of year.” She reached behind her to stroke the length of him. “‘Tis the season for sharing, after all, and I’m happy to share myself with both the valet and the footman.”

The three tumbled to the bed, laughing.

“They’re to be married on Christmas Eve!” Betsy said, pulling Davy’s head to her breasts as Tom’s cock continue to nudge her from behind. “Lady Penelope Lennox, pure as the first snow of winter. Like a lamb to slaughter she’ll be. They say Lord Westcott’s as randy as they come.”

Davy raised his head to kiss Betsy’s mouth as his fingers moved between her thighs to play with her pussy. “Do you speak from experience?” he asked.

“Can’t say that I’ve had the pleasure,” she sighed as she pulled his head down to her breasts. “I’m just a simple lady’s maid, after all, and he’s not one to dally with servants. But he’s had his share of lovers. I’ve heard the rumors. It’s said he’s tireless. And big.”

“Is he as big as this?” Tom, now tightly curled behind Betsy, shoved his cock into a passage well lubricated from Davy’s ministrations.

“Aah!” Betsy said. She wriggled her hips as she adjusted to fully seat Tom’s cock before laughingly answering his question. “Bigger, I’m thinking.”

Tom’s response was to growl and grasp Betsy’s hips. Raising her to all fours, he slapped her ass several times with his open hand before plunging back into her. The maid’s cries of pained pleasure only stopped when Davy rose to offer her his cock. With a practiced hand, the maid gripped the base of the turgid shaft and slid her lips over the head, causing the footman to gasp and take hold of the headboard to keep from falling backwards.

Betsy moved between the two with an almost feline grace, her round bottom moving in time to Tom’s thrusts as her head bobbed up and down on Davy’s cock. The two young men were strong and virile; both struggled to hold out, but their lusty partner was too much for them. Davy came first, crying out as he arched his back. Betsy swallowed his cum, her brown eyes boldly meeting his gaze as she did. With Davy satisfied, she raised herself up to her knees, bouncing up and down now on her second partner’s cock. As Tom continued to fuck her with long, eager strokes, Davy moved forward to grasp her in an embrace, pressing her pillowy breasts against his hairless chest.

“Oh, sweet Jesus, I’m coming!” Tom cried out, and at that moment—sandwiched between her two lovers—Betsy came, too, her pussy contracting hard on Tom’s thick cock until he was as drained as Davy.

Now sated, the three lovers collapsed back onto the bed. Betsy giggled as she nestled in the bedclothes flanked by the two happy men.

“You think Lady Prim-and-Proper will give his lordship such a present on Christmas Eve?” she asked.

“Not a chance,” Tom said. “Those fancy ladies with their airs and manners. I hear that they come to the marriage bed without a clue of what to expect, and then just lie in the dark and let the men have their way.”

Betsy shrugged. “It’s what them fancy lords want, though. An untouched bride.”

“And more’s the better,” Betsy replied with a smirk, “seeing as how you won’t likely be finding one downstairs.”

“I’m quite serious, really,” Davy insisted. “Seems a fair amount of work, training someone to please a man with skill.” He paused. “Must have taken you years to learn, Betsy.”

When Tom guffawed at this, the maid drove an elbow into Davy’s ribs.

“Not all of us need to be trained.” She playfully slapped him. “I was born with these skills, I was.”

Betsy grew quiet for a moment. “It is a bit sad, though, when you think on it,” she said. “A poor innocent girl coming to a man like his lordship. They say Lady Penelope’s mother is deeply religious, and wanted to become a nun. When she was forced to marry Lord Lennox, she decided if she couldn’t give herself to God, she’d give her daughter to him instead. Lady Penelope was just a wee thing when her mother packed her off to the convent school to be educated. Word is she hoped her daughter would take vows, but Lord Lennox wouldn’t hear of it. He said no daughter of his would wither away in a convent. So a marriage was arranged between her and Lord Westcott. And her without a clue. I pity the poor girl.”

“What?” Davy raised himself up on an elbow to look down at Betsy. “No pity for poor Lord Westcott? He’s the one we should feel sorry for, soon to be served up an icy bride after getting used to all those helpings of hot quim.”

“I’m sure her money will ease some of the pain,” Tom replied cynically. “Westcott’s new wife comes with a fortune. It all becomes his once the banns are read.”

“Aye,” Davy countered. “But what does he need with money? He’s got enough for both of them. Besides, money never warmed a man’s bed.” He paused. “I suppose he’ll seek out others soon enough.”

“Not if he knows what’s good for him.” Betsy turned to look at Davy. “If he starts philandering, he’ll risk his reputation among those who hold the Lennox name in high esteem. That’s more than a couple, and make no mistake.”

“What does she look like, his new bride?” Tom asked. “Has anyone seen her?”

Betsy laughed. “Likely pale as milk and thin as straw,” she teased. “Like all those grand ladies. You lads get stuck with us solid below-stairs girls.”

“I happen to like the solid ones,” Tom replied, grabbing her bottom. “Nothing like a fat arse to slap your balls against.”

“There’ll be no more ball-slapping tonight. I’ve work to do.” Betsy sat up and climbed over Davy, ignoring her lovers’ protests as they sought to convince her of having another go.

Once they realized they could not sway her, the two men rose as well to dress in their dapper service uniforms. Betsy, standing in front of a small looking glass set atop a bureau, tucked her hair back under her cap.

“Who’s to be her maid then?” Davy asked.

Betsy shrugged. “She’ll likely bring her own. They usually do.”

“Pity,” Tom said. “You could teach her a few tricks to please her new husband.”

Betsy’s mouth quirked into a smile. “I’d be a most unlikely choice, don’t you think, although you’re right—I could teach her a trick or two.” She smiled at her reflection, the knowing smile of a woman who appreciates the happiness that comes with the freedom of enjoying a good fuck. She looked at the image of her lovers reflected behind her. “Unless he’s the patience to teach and her the willingness to learn, it will be a most disappointing Christmas Eve for both of them.”