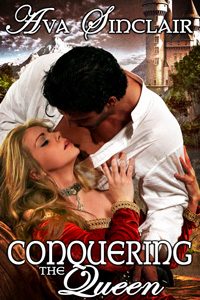 Avin looked hard at the man who’d blocked her path and was now yelling just inches from her face.

He had scraggly hair, a scar running down his cheek, and a nose that had been broken at least twice. His eyes were wild as they met hers, but Avin did not look away, not even when he spat in her face.

He was bold, bolder than most. As the guards reached for him, he raised a hand to strike her, but before he could, he was sent sprawling into the other villagers lining the streets.

When another guard nudged her forward with the hilt of his drawn sword, Avin took one more glance at the man who’d just accosted her.

And she would. She’d remember him, and the old woman who’d told her she deserved what she’d gotten, and the young woman who’d yelled how she wasn’t so high and mighty now. Avin would remember each and every one of her former subjects who now dared to mock her. She’d remember them. And she’d make them pay.

They were rounding the corner, beginning the last leg of the long, humiliating walk that would end at her former home. Something landed with a splat in between her naked breasts. Avin didn’t look down; she didn’t have to. She could smell the fresh horse manure, could feel the green-brown stain of it running down her ivory skin. A rotten tomato followed; it made a wet thud as it impacted her temple. Its aim elicited howls of congratulations to the thrower, and jeering laughter. Avin made note of the buildings, the street. One day, everyone who lived here would answer for fouling her.

Now she raised her eyes, and blinked back the tears that shrouded her view of the castle. Water glittered in the sunlight as it dripped from the rapidly thawing ice that had covered battlements for months and months. Winter was fleeing, and Avin knew her cheering, jeering former subjects believed her usurper had chased it away.

As she mounted the steps, a breeze caressed Avin’s naked skin, mocking her with its warmth. Water from the melting ice flowed from above like rain. She was forced to walk through it as she approached the castle door. She shivered, and briefly took comfort in the familiar sensation of cold.

How many times had she walked through the doors of this throne room? She could not count. Her earliest memory was entering behind her parents, the overbearing, calculating king and quiet mother she could barely remember. She’d been afraid then, and would be more afraid years later when, upon her father’s sudden death, she had walked this path as a young, unprepared queen. But by then, the hurt had set in, turning her heart to the same ice that coated the castle walls.

She could feel Xander’s eyes on her before she even looked up to see him staring from where he sat on the throne. Her throne. She waited for the ice on her heart to crack, waited to feel something—terror, longing, regret—but felt nothing. And for this she was glad.

He’d aged in the way men do when they grow into their full strength. The brawny arms that had once held her were even more muscular now, as were the legs defined by the doeskin breeches. His black hair, shorn short, was as dark as hers was fair. The muscular chest she’d once traced with her fingers was covered with a gray doublet. At the shoulder was the pin bearing the Ravenscroft house crest; it clasped a purple cloak.

The guard beside her pulled her to a rough halt and stepped back at Xander’s raised hand. Xander was continuing to stare, as were the other men in his company. Avin recognized his father, Lord Reginald. The old man, his face still set in the permanent haughty sneer she remembered, did not even try to hide his contempt.

Xander rose from the throne and walked down from the platform. When he reached her, his eyes swept slowly up and down, and Avin tried not to imagine what he was seeing—filth on a naked body as pale as thawing ice, a body as pale as his was bronzed, a body he knew as well as his own.

“Avin of Windbourne.” Xander’s voice was deeper now, and it held no affection. “When I last saw you, you were a sweet, helpless girl. Now here you stand, helpless once more.”

She said nothing. She revealed nothing as she silently added his name, and the name of his sneering father, to the list of those who would pay.

“Kneel.” The word was spoken firmly. She stared straight ahead, her eyes fixed on a point behind the throne as she ignored him.

“Kneel.” He issued the command again. Avin continued to stare. When she didn’t move, Xander nodded to the two guards who’d ushered her in. “Take hold of her, each by an arm.”

The men obeyed, and she let them, passively resistant. Xander walked behind her, lifted the curtain of heavy, matted hair over her shoulder, exposing her back and buttocks. She could hear him walk away. When he returned, he was holding a cane.

She remained silent, and concentrated on the thudding of her heart as he stepped behind her. The guards were stretching out her arms, holding them out and up so that she could not sink down or get away.

The hiss of the cane reminded her of a snake, the bite its strike. She saw a blinding white light as the line of pain exploded across her bottom. She tasted blood as she bit her lip to keep from screaming.

She swayed between the guards, but remained defiant.

He still remembered just how and where to strike. Hot tears stung her eyes, blurring her vision, and she breathed hard through her nose, sucking on her bloodied lip as she swayed.

Swish! This blow bisected the other two. Somewhere through the fog of pain, she thought she heard herself whimper, but the sound was eclipsed by Xander’s telling her she could end it by just crying mercy. Was that a hint of frustration she heard in his voice? Good. It strengthened her.

Swish! Now she did cry out, but did not kneel, would not kneel. She could feel the welts blooming on her skin, could feel the throb intensifying along with her dread of the next blow. She tried not to struggle, but her body writhed in desperate self-preservation.

“No.” Her voice raspy with pain.

Each blow was like a burn, going deep into her skin. She went limp, overwhelmed, sinking to her knees. She had not knelt, but Xander treated her collapse as if she had. The guards continued to hold her by the arms as he walked in front of her.

Another order. She ignored it. He could not hit her bottom now, not effectively, not with her in this position. But he could do something else, she realized. His fingers were cruel as he squeezed and twisted a nipple, hard and then harder and harder until she finally faced him.

The pain in her eyes did not diminish the defiance. But she was on her knees, and looking at him. He’d won. For now.

“Is it?” she replied, surprised at how steady her voice was given how loud her body was screaming. “Won’t only my death make it better in your eyes?”

Now he was silent, his dark brown eyes unreadable. Dark eyes in a dark face. Had that face always been so shadowed? Would the stubble hide the dimples when he smiled? Avin pushed the thoughts away. Those days were gone. He would smile at her no more. He was her enemy now.

“Death?” He was answering her question. “No. Death would bring no satisfaction to the subjects. Your cold, self-serving rule brought them to their low state. You forgot your place as a leader, which is to serve your people. Seeing you learn humility, being forced to serve, will be far more satisfying than your death could ever be.”

Xander took a step back and gestured to the side. “I’ve brought you something.”

She’d not noticed it when she entered the throne room, but there it sat atop a pillow-topped pedestal. It was her crown, taken from her the day her own soldiers stormed the castle and dragged her from the throne. Xander picked it up.

“It’s been adapted for a new purpose now,” he said, and Avin watched in stunned silence as he grasped and pulled the narrow gold circle, opening it.

“Lift her hair,” he said to one of the guards, and rough hands pulled the heavy tresses away from her neck as Xander put the crown around her neck and bolted it shut. Against her will, Avin began to shake.

“That’s more fitting, I think,” he said, tipping her chin up and looking down into her eyes. “What was once your crown will now be your collar, and you shall wear it as my slave. You shall wear it until you learn what it is to submit. The people you once ruled will now watch as you sit at my feet, and are only fed by my hand. If you disobey me, you will be corrected, with your punished bottom displayed from the castle window.”

He clapped his hand and two stoic-looking older women entered the room. Avin recognized them as nurses who’d once tended the children of nobles in Windbourne. Now they moved to either side of her and clutched her by the arms as the guards had done.

“Take her to the room in the tower,” Xander said. “See that she’s bathed and dressed. Summon me when she is presentable.”

The two women curtseyed and pulled Avin to her feet. She did not resist. She did not look back. She simply walked away, back straight, bottom burning, her former crown heavy around her neck.