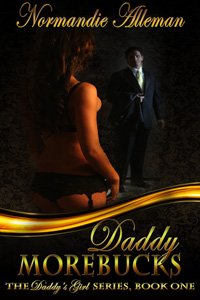 Sitting on the barstool, Marley crossed her fingers and legs for luck. She tried, but couldn’t quite get her toes to cross in high-heeled shoes. Dear God, please let this be the right place for a score.

In a flirtatious gesture, she tossed her jet-black hair over her shoulder and glanced around the swanky hotel bar for prospects. The sophisticated low lighting and the rich mahogany furnishings gave the place a cozy, yet elegant feel. Elaborate sconces dotted the walls. Exotic plants warmed the metallic, modern tables and the sleek bar at which she sat.

The other patrons were lost in conversation. No loners. No potential johns. Marley sighed deeply. With only enough money for one cocktail, she realized her time was limited. She couldn’t nurse the same drink all night.

“What the hell,” she thought and took a slug of her mojito.

She was about to ask the bartender if he knew where she could find some action when a nervous-looking gentleman carrying a briefcase walked into the lounge. He scanned the room like someone who had just realized he lost his wallet and was returning to the place where he hoped to God he’d find it.

Marley looked at him with interest. This guy had potential. The man glanced up, meeting her gaze. Relief washed over his face, and he stalked straight toward her.

“Oh, I hope so. May I sit down?” He indicated the bar stool next to hers.

Upon further inspection he didn’t look like her usual clients—businessmen far from home—but you never knew and she was desperate not to have to spend the night in the shelter again tonight. “Suit yourself.” She shrugged.

He sat down heavily, mopping his brow with a napkin from a stack atop the bar. His head was shiny, bald as a cue ball, and he wore glasses with thick, black frames. Nerdy. Harmless.

Finally, he stage-whispered, “Please don’t throw a drink on me or anything, but you wouldn’t happen to be a working girl, would you?”

The corners of her mouth turned up. She had the choice of being insulted or taking this question as a compliment. Marley chose to take it as a compliment. Nobody approached ugly, nasty girls in hotel bars and asked them such things. Did they?

She gave him her best come-hither look. “Who wants to know?” she asked in a sultry voice.

“I do. I mean, not for me. See, I was supposed to arrange a date for my boss, and she didn’t show up. Oh my God, he’s going to kill me.” He jiggled his leg as he talked. The man was a bundle of nerves.

“Wait, what?” A boss. He had a boss. Now she was getting somewhere. Placing her hand on his shaking leg, she turned the charm up to max volume, purring, “Why don’t you tell me all about it… and maybe you should have a drink.”

He took a deep breath and ordered a scotch on the rocks.

“Okay, my employer.” He cleared his throat and took a long draw on his drink before continuing. “He has certain tastes and my job, well, one of my jobs, is to occasionally procure a woman for him who can meet his needs.”

When people get desperate enough, they’ll surprise even themselves as to what they would do. She could attest to that.

“Well, that’s what he is. Doesn’t usually like to play with the same girl twice. You’ll have to sign a non-disclosure agreement, a contract, the works. But he pays well.”

Never the same girl twice. That sucks. So much for finding Daddy Warbucks.

“What is well? And how rough does he get?” It was sad that she asked about the money before the safety issue, but there you were.

“I’ve never seen any of the girls hurt to look at ‘em afterwards, and I always arrange for their transportation home. Depending on how pleased he is with you… most nights he pays five grand.”

Marley’s eyes widened in spite of herself. “Did you say five grand?”

“Yeah. You interested?” The glow of hope radiated from him, and he grabbed her delicate hands in his clammy paws.

“I usually hire from a service, but the one who was supposed to come tonight came down with food poisoning or something, and Miss Jay’s has no staff available. All booked up for a senator’s yacht party or something.”

Marley made a mental note to self, Miss Jay’s. If she did have to stay in this life, she’d rather do it on a yacht than in a dirty alley.

“So you’re supposed to be vetted and all that. He can’t know that I dropped the ball on this, so can you just play along like you’re the girl from Miss Jay’s?”

“Sure. How about you buy me a drink?”

“Oh, he won’t want you to be drunk. How much have you had to drink, anyway?” he frowned.

She raised her eyebrows. “Really? I don’t think you’re in a position to be so demanding. I mean, I am doing you a favor,” she said with a tilt of her shoulder. “What’s your name, anyway?”

“Milton. Milton Barnes.” He took a deep breath and asked the bartender to refill her glass.

“What about your boss? What’s his name?”

He gulped down the last of his scotch. “That’s not anything you need to know. Non-disclosure and all that.” He opened the briefcase at his side and pulled out some papers. “Here, I need your John Hancock on these.”

Boy, the rich really are different. A written contract for sex.

Marley perused the long paragraphs. All the words ran together, none of them making much sense to her. “What does it say?”

“Basically, that you aren’t going to sue him or call the cops if he hits you, and that you will never tell anyone what transpires between you two.”

Marley laughed so hard she almost fell off her barstool. “He will sue me? I haven’t got anything.”

Shaking her head, she took the pen he offered her and signed her name at the bottom of the pages marked with an ‘x.’

“Deliriously.” He quickly put the papers away and gave her a onceover.

“What? Don’t I look okay?” Marley had spent her last twenty at the thrift shop on the heels and glittery emerald green cocktail shift she wore. She thought it was mighty classy for twenty dollars. She might have been broke, but she had style and she cleaned up nice. A chameleon, Marley prided herself on being able to fit in anywhere.

“It’s not that. We need hair ties or something.”

Marley found a few elastic bands in her purse. “Like these?”

“Yeah. Go in the bathroom and put your hair in pigtails and meet me outside. It’s almost showtime,” he said, looking at his watch.

“No. He likes little girls. Just do it.”

“Wait. He’s a pedophile? You never said anything about that.” Her voice wavered.

“No, no. He’s not a pedophile. He’s just that kind of dom. Likes to be a daddy to little girls. It’s all fantasy. He’s never been with a kid. He’s not into that kind of thing. You know, he probably likes the Catholic schoolgirl thing. I don’t know.” Exasperated, he shooed her off her stool and toward the bathroom.

She marched ahead of him to the lobby, calling over her shoulder, “If you say so…”

“Five grand. Five grand,” she repeated to herself. Milton was right. Heck, she could put her hair up in pigtails for that kind of coin.

“What about downstairs?” Milton pointed at her crotch, a spray of scarlet coloring his cheeks. “What kind of, um, haircut do you have?”

“Let’s get you a razor. It all needs to come off.” He popped into the gift shop and purchased a package of disposable razors. “Think little girl,” he whispered.

“Whatever you say.” Marley rolled her eyes and ducked into the ladies’ room to take care of her new client’s special requests.

She returned moments later with twin ponytails, one on each side of her neck. The kind on the sides of her head looked ridiculous so she settled for these. She didn’t want to draw any more attention to herself than was necessary in the lobby of the swanky hotel. Being asked to leave the premises was one of her fears.

“Where will I meet Daddy Morebucks?”

“In the penthouse suite. Come on, let’s go.” He took her by the elbow and guided her into the elevator. Once inside, he inserted his key before pressing the button for ‘PH.’

Marley shifted her weight from one foot to the other. “When do I get paid?”

“I’ll pay you after he calls me to arrange to have you transported home.”

Home. She didn’t have a home. Would she tell the driver to take her to the homeless shelter? No. She couldn’t do that. Miss Jay’s girls didn’t live there, and neither would she once she had five G’s in her hot little hand.

Her head began to pound. Forget it. She’d worry about where to go later.

Marley batted her eyelashes at Milton. “I usually get paid up front.”

Milton snorted. “You have to be one of Miss Jay’s girls. Or I’m done for. You too. And they get paid afterwards. That’s how it’s done.”

“Okay, okay.” She knew when not to push, but she felt uneasy not having the cash in hand.

The elevator car stopped and they stepped out into a small hallway.

Milton visibly gathered himself and checked his watch for the umpteenth time. “You ready?”

He nodded at her and tapped on the door.