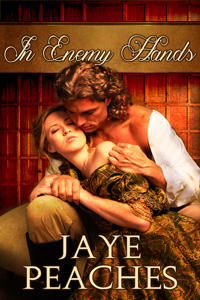 The wagon’s wheels sank further into the frostbitten mud. A chest toppled onto its side before settling amongst the other boxes piled high on the back of the cart.

“My lady mother, the wagon is overloaded. You will never make it to Oxford.” She tucked her shawl under her chin and stamped her feet on the icy ground.

“I am not leaving anything for those marauding Roundheads.” Her mother took a step towards her. “Please, Hester. Reconsider and come with me.” Her arms lifted slightly before dropping back down.

Hester turned away from her mother’s pleading eyes and grey face. The last few weeks had aged her features, adding new wrinkles. “Mama, I will not leave Franley Court. I can’t go.” Over her shoulder and shrouded amongst the mist was her family home with its herringbone redbrick walls and timber beams.

“You father will be furious,” said her mother. About them, the small gathering of servants listened in silence to the family argument. It hadn’t been the first time the two had fought over Hester’s decision to stay.

“My father,” said Hester, turning back, “isn’t here to say. Nor are my brothers. Somebody has to defend our property. I pray papa, Henry, and James are well, but I will not leave here until they return.”

The horse tasked with pulling the wagon neighed, snorting white breath into the early morning air. Behind the cart, lined up with their own possessions loaded on donkeys, ponies, or their backs, were the servants who had elected to leave with her mother. Hester swallowed hard—the moment had come for departure and farewells. The servants shuffled their feet about in the mud, avoiding Hester’s gaze. They had watched her grow up and now they were leaving her to fend for herself.

Her mother wiped away a tear. “I will pray for you, too, child. You may not have my blessing, but I cannot force you to come with me.”

Hester edged forward and took her mother’s icy hand in her own. “Keep to the main roads. Make no mention of papa or my brothers. You must appear like peasants and not escaping Royalists.”

Her mother nodded, picking at the loose threads of her cloak. A rough cloth and not typical of her usual garb.

With a peck on her mother’s cheek, Hester stood back and impulsively curtseyed. A last attempt to placate her mother and regain her respect.

The steward, dressed in sombre black, helped her mother onto the front of the wagon, placing a horse blanket over her legs. With a crack of his whip, the groom called out to the horse to walk on. For a few seconds the beast strained, leaning forward while the wheels rocked back and forth, then with a helping shove from some of the manservants, the wagon moved.

The band of dozen or so people followed the wagon as it made its way along the path towards the main highway. Hester watched, her heart sinking fast. What had she done? Left in charge of the family home with no more than four loyal servants, none of whom had any skill in warfare, whilst the county swarmed with Parliamentarian soldiers.

Just as the wagon reached the distant crop of trees, her mother turned and waved a white handkerchief. Hester returned the gesture and then, with the fog enveloping them, the household of Franley Court disappeared.

Hester trudged back to the house. The path cut straight through a small meadow, which led to the main gate and served as fodder for the two goats and three cows. The goats had been tied to a post to prevent them from wandering, whereas the cows never strayed far, too interested in the good quality hay left in the barn for them.

Passing the main iron gate, Hester paused before shutting it behind her. With a small brood of hens and one pig, the estate possessed little livestock. During the three years of civil war, many animals had been butchered but not replaced. She hoped to supplement their meagre provisions by catching rabbits and pigeons. Apart from store of fruit, cheese, and some grain, little else had been gathered in preparation for the winter. Hester anticipated the dark months would be hard and long, too long for such derisory supplies.

She ambled over the bridge covering the moat. Staring into the murky water, she dearly hoped the resident heron hadn’t snatched all the trout. Beyond the moat, the three-sided manor house surrounded the cobbled courtyard. A classic C-shaped structure with two wings on either side of the main building. Impressive, well-maintained with glazed windows and lead guttering, Franley Court stood proudly in the heart of the East Anglian countryside.

Unfortunately, the house presented little in the way of fortifications. The shallow moat could easily be crossed and the turreted towers on the ends of the two wings contained no armaments. Beyond the moat, the small walled garden provided no defensive value.

Hester opened the great oak door, which led straight into the main hall, and let out a deep sigh.

“Mistress?” Out of a gloomy corner approached Buckland. Her father’s loyal manservant was a gentle giant of a man, wide in girth and completely bald. When she had announced her intention to remain behind and invited any servants to join her, he had immediately stepped forward and pledged to defend Franley Court.

Two others joined him. Miriam, a capable feisty maid of middling years. A hardworking woman, she gave no reason for her decision. Hester had flooded with relief knowing another female would be in the house with her. A few hours after the meeting had dispersed, another approached and offered to stay. The cook, Mary, a petite, but robust woman in her fifties, who rarely stepped out of the kitchen. Her reasoning was simple.

“I’m not going on any journey. I was born in these parts. I belong here, with you, mistress.” She’d wiped her hands on her greasy apron, given a nod, and returned to her domain without saying another word.

Four adults to stand guard over an extensive country house, the property of a wealthy landowner and supporter of the king.

Hester slumped into a chair, burying her head in her hands. How could she have been so foolish? Weeks had gone by with no word of her father or brothers. News of battles lost by the king and the rise of a formidable army of Parliamentarians. Nothing boded well for the Royalists and their Cavaliers. Yet, she believed her duty was to her father and the family home, to defend the estate from robbers and militia to the best of her ability.

“You should have gone with them, Buckland,” she said, lifting her head up. The tall man moved out of the shadows and stood by the great banqueting table, which was a family heirloom and made over a hundred years earlier from a vast oak tree. Too big to fit on the wagon, Hester had joked lamely to her straight-faced mother.

“No.” He shook his head calculatingly. “I promised Sir Francis to keep my eye on you.”

Hester gave a small smile of appreciation. “He won’t like this, will he?”

“I fear not. He would have you go with your mother. But… he is not here. Your mother, God bless her, isn’t a strong woman like yourself. She wouldn’t cope with the stress.”

“I hope she makes it to Oxford.”

“God willing.” He rested his hand on his chest.

“You would have made a good puritan, Buckland.”

“I care not for this war. Who fights whom. It is all a sad nonsense. I remain loyal to the family who gave me a roof over my head and food in my belly.”

Hester guffawed at the mention of food. “I don’t think there will be much for you this winter.” She rose, stood straight, and tossed her shawl on the table. “Let’s be about our daily tasks. Hens to feed, cows to milk. I will not shy away from hard work. I am mistress here now and I have no intention of letting this house fall apart.”

“You are brave, mistress. However, the lack of food won’t be our downfall. We are loyal supporters of the king in the midst of Parliamentarian-held land. We are quite doomed, I fear.”