For His Pleasure by Vonna Harper – Sample 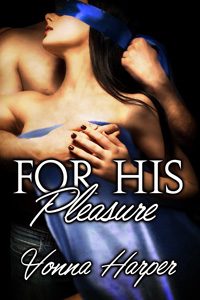 Heat wrapped around Asia Kandell the moment she stepped into the Midnight Special Lounge. A quick, hard song from an unknown source ignited her nerve endings and brought her hand to the top of her blouse. It wouldn’t take much encouragement, or should she say much more stimulation, for her to unbutton the buttons. As soon as she’d discarded her blouse, she’d turn her attention to her bra in her desperation for freedom.

She shouldn’t have come into this opulent place with its leather club chairs grouped around tables meant for intimate conversations. The air smelled of tequila and beer, gin and whiskey, and the sleek aroma of rich red wine. Between the scents, low lighting, nerve-shaking music, and her own screaming hormones, this was the last place she should be, alone, on a Friday night. But what was her option? Staying in her condo while she drank too much wine and listened to throbbing songs about getting it on with the right partner?

She’d take a fuck, with anyone, anyplace, in any form or fashion. Then go back to being alone.

Waiting for her eyes and ears and skin to adjust to the setting, she amended her thought. There were certain forms of the sex act she didn’t have the patience or stomach or desperation to endure or repeat in the foreseeable future. Civilized and considerate added up to boring. Double boring.

A drink. That’s what she needed, chugged down as fast as her system could handle followed by a slow and appreciative sipping while she scanned the room in search of a man with rough edges and ways.

Putting her focus on the act of getting to the bar without being mowed down gave her a few seconds of relief from the throbbing between her legs. The bartender, attentive and yet suspicious of a relatively young and attractive woman coming in alone, gave her too many choices to consider. In the end she settled for the house chardonnay and a stool at the bar.

“No,” she had half a mind to tell him, “I’m not a hooker. Thought about giving it a try a few times but my CPA talked me out of it. Too hard to document the tips.”

If nothing else, sitting took the strain off her toes and insteps, and although she risked losing the damn heels in the near dark, she kicked out of them. Ah, relief. As for why she sometimes tottered along on three-inch torture devices, well, when you’re barely five foot one and the populace keeps getting taller, you do what you can to compensate.

The wine was good, more than just good, nearly cold enough to make her teeth ache, and soothing to her throat. Sighing in anticipation, she took another sip. Then she swiveled on her stool. No matter that most movies specialized in bars and lounges full of class-A singles, most of tonight’s crowd consisted of middle-aged groups.

Work seldom brought her to this part of the city so when she’d spotted the lounge tucked into an upscale hotel, she’d taken a chance on it being a meat market. Wrong. Once again.

It was time for Plan B. She’d have her two drinks, hail a cab, and go home.

At that thought, depression rose until she thought she might drown in it so she fortified herself with more wine and tried to distract herself by taking in the various groups one table at a time. A quartet of women on the downhill side of thirty made her acknowledge how soon she’d be there herself. Three of the four carried more pounds than was healthy, and they all had that look about them. Not quite desperate but getting there. They were pretending to care what their companions were saying, but their gazes kept straying elsewhere. A specific elsewhere. Curious, she followed their example.

Two men. Well-off if her impression of their suits and manicured hair was any indication. Probably six feet or a little more going by what she could see of their upper torsos above their table. None of that lean and lanky look that defined too many corporate types. Fit. As in, work-out-regularly fit. They smiled easily, which she liked. And they kept looking at her.

No surprise there given her solitary status, but what if they were trying to work their minds and courage around to approaching her with a proposal that would consume the rest of the night and involve more than one body opening at a time? Hmm. How would she respond?

“You want a refill?”

Jumping a little, she spun back around and faced the bartender. “Sounds good,” she told him. When he nodded and wandered off to fulfill his mission, she gave her glass a bemused look because she didn’t remember draining it. Someone had changed the music. Now a woman with a fuck-you huskiness was belting out a country song about fast driving on a hot night. If only that was her! Driving and being driven by a fast, hot man!

Get a grip! Otherwise you’re going to come right here and now. What you’re feeling tonight isn’t the real you. Remember who you are, contained and controlled, at least most of the time.

A new sensation stroked her spine, prompting her to make another half circle. She found herself looking up, way up at the two men who’d been watching her. They were smiling their easy smiles and yet she thought she detected a certain nervousness in their gazes. Well, at least they all had that in common.

“I’m Mike,” the slightly shorter man said. He started to stick out a hand then pulled it back. “And this is my friend Todd. Ah, we’ve got… we want… we’d like…”

“Spit it out, Mike. You sound fifteen,” the bartender said. “And, lady, I happen to know he’s happily married and harmless, as is Todd, although his IQ is never going to make it to triple digits. Whatever they’re up to, you’re not going to need to slip a knife between their ribs.”

“I’m not carrying a knife,” she admitted. They really were hunks.

“Good, good,” Todd muttered, making her wonder what he was referring to. “Look, would you mind joining us at our table? We have a… a business proposition to discuss with you.”

“It’ll be legal,” the bartender said. “At least it better be or I’ll tell their wives.”

A minute later a still-barefoot Asia was sitting across from the men. They were nervous, which was kind of cute. Between that and the bartender’s smile, she’d relaxed. Hopefully their emotional states kept them from clueing in on her rock-like nipples and the compulsion to press her thighs together. No two ways about it, she needed to get laid. Hard and fast.

“We have a friend,” Mike finally got around to saying. “The three of us went to college together. You know how it is, when you’ve been playing varsity baseball since you were high-school sophomores. You think you own the world, and the Yankees can hardly wait to sign you up.”

Although she could have pointed out that she couldn’t really relate, she didn’t.

“Our friend—his name is Ritter Brandt—he’s the only one of us who made good on his boasts to make it to the big time.”

The two exchanged glances. “‘Cause he doesn’t know what we’re planning,” Mike admitted.

“We don’t know. It’s up to—look, I gotta ask you something. I just hope you don’t take it the wrong way.”

No wonder Mike’s wife was in love with her husband. That little-boy grin coming from a no-question-about-it jock was a killer. If the mysterious Ritter was anything like Mike and Todd, and available, maybe the night would turn out better than she’d been afraid it would.

Todd cleared his throat then cleared it again. “We’ve been watching you.”

“You did? Yeah, I guess you did. About Ritter, he didn’t play for the Yankees but he was drafted in the second round his senior college year and played for three teams over ten years before he retired a couple of years ago. He made good money, damn good money.”

Much more of this and she’d know Ritter’s shoe size. “I see.” She didn’t.

Her head shake led to a short and choppy explanation that Ritter was now the head coach for the local university’s softball team, which was called the Fillies. They’d come in second in their division the first year Ritter was at the helm and it was looking good for them to take the state title this year, wherein lay Ritter’s problem.

“Dating’s not easy for him, being high profile and all,” Todd supplied. “He got married right out of college, but it didn’t last. No children, which simplified the divorce. Since then there’s been a lot of—never mind. He’s single. A take-charge kind of guy if you get my drift.”

“With a birthday coming up.”

They weren’t going to ask her to jump out of a birthday cake, were they? Just because her short stature meant they might get away with a cupcake didn’t mean she’d say yes. However, she was intrigued.

“You were going to ask me a question,” she prompted because neither man seemed to know what to say next. “I’m partial to chocolate, but if the lemon is really lemony, I go for that.”

Her attempt at a joke went right over their heads, maybe because they’d gone back to staring at each other. Studying them, she decided they had something to do with financing and investments, maybe stockbrokers or bankers. Given their athletic bodies, it seemed a shame to have to shove said bodies into suits, not that they didn’t fill them out to perfection. If Ritter came from the same mold—

“A what?” She couldn’t get her mouth to close.

“Not a hooker,” Mike corrected his buddy. “A call girl. Paid escort.”

I own a women’s boutique, she thought but didn’t say so because the conversation had taken a mind-stealing turn. What her store carried in the way of upscale female business attire couldn’t possibly matter to them. “Wait a minute. You’re thinking—you were thinking you could hire me to…”

Fishnet stockings, sheer blouse, and black lace push-up bra. Dangling on the arm of the hunk of the year. Smiling up at him and guiding his hand to my hip. Laughing at his jokes, showing him that his forefinger fits perfectly between my perky breasts in the push-up bra, turning into him and spreading my legs as far as my thigh-high leather skirt allow. Gliding into the most expensive restaurant in town and squeezing into the seat next to him so he can rest his hand over my inner thighs. Makeup troweled on and dressed-to-the-nines rich women glowering at the whore in their midst while their husbands pant and fantasize. Ritter letting me know with a look and a jerk of the head that he expects me to slip under the table, unzip his slacks, and suck him while we wait for the salad to be served. Sliding his fingers into my hair and holding me in place. Letting me know I’ll pay for it if I don’t comply with his every command.

Maybe I’ll pay even if I do what he wants.

“What?” she babbled, returning to the here and now too late to catch what had just been said. Although her cheeks were about to catch fire, she was in no hurry to stomp the fantasy into oblivion.

“One night. Playing to Ritter’s fantasy.”

What about my needs, the ones buried deep inside me?