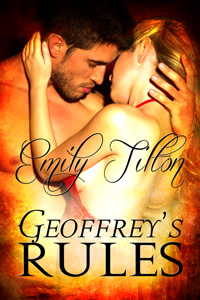 There was nothing naughty about me. That was the problem, I thought. If my fantasies and my romance novels could be trusted, I needed to be naughty to get a spanking.

I was sitting in a café in Cambridge, Massachusetts, trying desperately to finish reading an absolutely horrendous essay for a seminar that was due to meet in fifteen minutes, and all I could think about was the romance novel I had been reading that morning in bed.

Romance was my guilty pleasure. But, I thought as I tried to make headway in the seminar-reading, guilty pleasures are just supposed to be guilty pleasures. To be sure, my own pleasures in reading romance were rather more extreme, and from a traditional point of view, should be making me feel guiltier than say, watching that silly TV show about the bunch of people in the apartment building. Guilty pleasures, I knew, weren’t supposed to stick in my head and stand resolutely in the way of post-modern theory.

Despite myself, I thought back to that morning, spent in bed in my room in the apartment I shared with three other female grad students. The romance I had been reading was called Maud’s Master, and it was in the genre I read almost exclusively these days: BDSM—Bondage and Discipline, Dominance and Submission, Sadism and Masochism.

Maud was naughty. She actually stole a piece of wicked lingerie, and Jeff, the mall security guy, caught her. But Maud was so charming that despite his better judgment, Jeff (an experienced dominant, particularly adroit in the art of administering just punishment to naughty women) offered her the chance to take a spanking instead. Everything fell into place for them after that, though it took Maud ten chapters to reform fully, over the course of which her bottom was bared time after time. Once further intimacy was established, Jeff demanded that Maud always be naked for her punishments.

And Jeff knew what to do with a naked girl after he had spanked her; their sex was of the Dominant/submissive variety and Maud loved it.

Add to that the fact that so-called alpha-males like Jeff haunted my imagination but always seemed in real life to speak with so much less refinement than the hunky gentlemen of my fantasies. Even if I made my run at naughtiness and managed against all odds to get spanked by Jeff, I probably wouldn’t be able to stand the sight of him a week later, let alone forty years later the way Maud seemed destined to be able.

I gritted my mental teeth and read a sentence about the significance of Proust to the birth of the modern. Goddammit, why had I read Maud’s Master for an hour with my hand up my nightgown that morning instead of getting up and starting to read what I should have been reading?

And why, thinking about it here in the café, did I want nothing more than to get up, go to the bathroom, lower my jeans…

Ah, hell. I only had ten minutes, so I grabbed my bag before I went in there. As soon as the door was closed, I dropped my bag and turned to the mirror. Chestnut hair to my shoulders, angular face, no make-up around my hazel eyes. Currently wearing a jean jacket over a long-sleeve, blue t-shirt on top. Down below, I was lowering my jeans quickly, to rest around my thighs, the white cotton panties atop them. With my left hand I raised the front of the T-shirt.

Why did I always whimper when I saw myself—my self, I always thought, the me between my legs—in the mirror? What the hell was wrong with me? Why did I always pretend that the hand (my own hand) that began to stir the soft hair between my thighs was a guy’s hand—no, really, not just a guy’s hand but the hand of a guy like Jeff the spanking security guard? And now, now he wanted more. He wanted more, and he wanted it immediately: the fingers pushed, invaded. I gasped, said “No! Please!” I closed my eyes.

The door, which I had apparently in my haste neglected to lock, opened. My life changed, for as it turned out, I had found a very serviceable way to be naughty.

My life didn’t change immediately, though, for all I heard from the other side of the door was a man’s voice saying “Whoops! Sorry!”

I waited, my heart beating wildly, for a full minute, hoping desperately that I wouldn’t be seen exiting, and above all that there would be no men outside the door. With a flushed face and an inability to raise my eyes from the floor, I emerged, having judged the angles in the bathroom and realized that if he had been looking straight ahead as he entered, he would absolutely have seen me in the mirror with my fingers buried deep between my thighs and a look of wild erotic abandon on my face. He might even have heard me say, “No! Please!”

I tried to shuffle out, but a female barista called, “Hey! The guy who was here wanted me to give you this.” I turned to see that she was holding out a business card.

It also had his phone number, email, and URL. I turned it over and my blush returned instantly. In block letters written in ink, it said,

You were naughty. It appears to me that you need discipline. If you are interested, let me know.

But the website was a bare-bones, apparently perfectly legitimate business website for his digital media consulting company. He appeared to work for high-profile clients who wanted to shape their digital messaging in specialized ways; I couldn’t tell from the site what those specialized ways were. The one picture of him on the site showed him in a standard entrepreneurial pose, gazing out at a seascape, probably on Cape Cod or one of the islands.

Was this the face of my master? I couldn’t believe that my wayward brain had formulated the thought, but I couldn’t deny either that the words had drifted through my mind or that they had immediately caused dampness between my legs.

Without even meaning to really, I started to write the email, right there in my seminar, while my fellow grad students were discussing Proust.

You left your business card for me today in Café Verona. I’m terribly embarrassed, of course, but…

Suddenly I realized what I was doing, and remembered what it had felt like to hear the door opening when I had just been watching myself bury two fingers between my thighs and inside my soaking slit. I turned bright red and slammed my laptop shut.

Later in my room, back in my apartment, my apartment-mates Anne, Jill, and Nora all thankfully absent, I opened my laptop again. I looked at the email and took out the business card and checked to make sure the address I had put in the “To:” bar was exactly correct.

I’m terribly embarrassed of course, both because of what you saw…

I realized that I was typing with my left hand, while my right had found its way to the front of my jeans, pretending vainly to be innocent as I looked down at it, curled there in my lap.

That very feeling was perhaps the most important reason I (at least to this point) hadn’t had any doubt that I would email Geoffrey King. If there was one thing I needed discipline for—something which actually was sadly absent from most of the BDSM books I had read—it was my self-pleasuring problem. Who knew if he would turn out to be creepy, or if he would have the kinds of “old-fashioned” ideas that I guiltily adored in the heroes of the romances (not for myself, just for the fantasy)? At this point, it didn’t seem like I had anything to lose—especially since I didn’t think I had any right to a single shred of dignity after Geoffrey King had seen what he had clearly seen me doing in the bathroom.

I’d had two serious boyfriends, and as an old book might say, the ways of men were not unknown to me, but with neither of them had I truly connected erotically; I had not even considered telling them about the interest in spanking I had since I was old enough to remember.

Now, there was Geoffrey King. I surfed back to his website and looked at his picture. Dark brown, wavy hair and brown eyes. High cheekbones. Well built, but not heavily-muscled, thank goodness. Very, very intelligent looking.

What would he do to a girl he had found playing with herself in a café bathroom? He might, if he were to meet her on the street coming out of the café, come up behind her on the sidewalk and say, “I saw you in the bathroom.”

She would spin around and look at him, her face crimson. She would try to say something, but her power of speech would fail her.

Geoffrey King, hyper-intelligent consultant, sexy dominant, would say, “Now, are you going to take your punishment like a good girl?”

She would have no choice, somehow. She would follow him to his… um… hotel room, and he would tell her to lie down on the bed on her tummy, and then to pull her jeans down to her knees. “I’m going to spank you with my belt now; you have to learn to respect your body.”

My right hand was inside my panties, the fingers moving very gently, the way they did at the beginning. I made quiet little noises, tiny sighs, as my breathing became more labored.

The girl on the bed cried out as the belt hit her bottom—the first time she had ever been punished there, where she had always known she should be punished.

I’m terribly embarrassed, both because of what you saw and because I’ve never confessed to anyone that I think I do need…

I rubbed my swollen clitoris, ever so lightly, then harder, and whimpered a little and typed,

…discipline. I am free for lunch tomorrow, if you would like to meet, and…

Could I type what I was thinking? I ran my three middle fingers up and down, half-thinking and half-feeling, and felt all the muscles in my upper body tense deliciously. He was spanking her with his belt in the hotel-room, and she was crying, “I’m sorry, sir,” and now he was pulling her jeans down even further.

…if you think it appropriate, discuss how I should be chastised for my immodest behavior.

I typed and deleted five different closings, from “Sincerely” to “Naughtily” and back, and finally settled on,

Now. My fingers were moving faster and faster, and my white cotton panties would have to be changed right after I…

Was I going to click “Send”? I would have to do it with my right hand, but my right hand wasn’t in a position to do it just now, and I knew—absolutely knew—that if I waited until I had come, I would never, ever have the guts to click “Send.” I groaned. With my left hand, I reached all the way across the keyboard, grabbed the mouse, positioned the cursor, and clicked “Send.”

The girl on the bed hadn’t thought she was going to be fucked, but now Geoffrey King was fucking her from behind, doggie-style, the dirty way I had never had the courage to ask for, and she was screaming in pleasure as she had never screamed for her boyfriends.

With a noise in my throat like I was being strangled and muscles spasming on my desk chair, I came, then panted for a few moments and saw on my screen,

What had I done?